Following on from Sagrajas (1086) I'll be working on two projects, the Battle of Brunanburh 937 to satisfy my Early Middle Ages cravings and the Battle of Montlhery 1465 to tickle my Late Medieval fancy!


These are two battles that I've held a very keen interest in for many a year. Thus far I've not had the time to venture into modelling either, but now my tail is up again! I've been exceptionally lucky in having someone volunteer to translate the Montlhery - 16th July 1465, from the Forgotten Battles Series published by Historic'one. So a massive thank you to Stephen Phenow for taking time out of his very busy schedule to come to my rescue and finally attempt to put this battle into action on the tabletop. A dream come true.

So, I have Sagrajas 1086 to finish by mid May next year and two projects starting simultaneously following on from that.

More info on Brunanburgh to follow shortly but for now; Montlhery 1465. 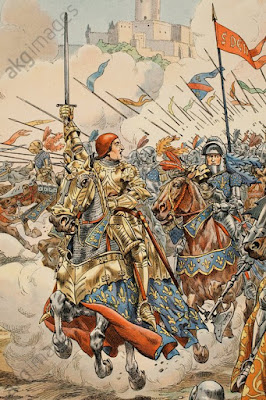 
"It was in July, on a hot summer day that the royal armies of LOUIS XI and the Burgundian armies led by CHARLES Count of Charolais, son of the Duke of Burgundy, allies to the Lords of the "League of the Public Good ", s' fought for this memorable battle.
The disjointed and unforeseen battle of MONTLHÉRY already indicate a new way of fighting. The Count of Charolais, wishing to join the army of King LOUIS XI before she could return to Paris, coming from Orleans, had taken up position at LONGJUMEAU, his precautionary guard in the village of MONTLHÉRY. The King, informed of the Count's presence on the left bank of the Seine, hastily sent for Charles de MELUN, his lieutenant-general in the Ile-de-France, to send two hundred spears from Paris under Marshal RONAULT in order to take the Burgundians on the back.
The Count of Charolais had entrenched himself in Longjumeau with his chariots, and on the morning of July 16, 1465 Roy occupied the castle of MONTLHÉRY at the head of the army, and hastily desired to reach Paris. What the Comte de Saint-Pol commanding the rear guard of the Burgundians made a movement back, leaving between him and the army of the King, a stream and woods, but did not want to go further. Charles of Burgundy therefore left.

Longjumeau and joined the vanguard. The attitude of the battlefield is known (see attached plan). The village of Longjumeau straddles the small river Yvette, in a small valley. On the south side extends to the town of MONTLHÉRY, a plateau cut by two small streams flowing in marshy bottoms, and one jumping into the Barley, the other into the Yvette. The Chaussée d'Orléans passes through Longjumeau and the town of MONTLHÉRY on the plateau. North of MONTLHÉRY about a kilometer is a small eminence.
Charles de Melun could not assemble the two hundred spears demanded by the King, who, from the top of the dungeon of the castle, seeing nothing coming from the Parisian side, would have liked to avoid the battle. The Comte de Charolais, content to block the way from the capital to his adversary, did not seem anxious to engage him. But the leaders of the two avant-gardes decided otherwise, and being separated only by a stream (see A and B) came to the hands (see A 'and B').
The Burgundians were already massed, while the French arrived in line to support their first body. While the Burgundian leaders were discussing whether it was better to fight on foot or on horseback, the royal army had time to battle, and the action began, no longer as on a narrow front, but on a long line; so long that while the right wing commanded by the Comte de Charolais sank the French left wing, the right wing of the Royal Army beat the left wing of the Burgundians. The centers remained on their respective positions. The Count of Charolais, who commanded the victorious right wing of the Burgundians pushed so far, that
"Never," said COMMYNES , "there was greater flight on both sides, but by especial they demolished the two princes in the fields.From Roy Fust a man from Estat fled as far as Lusignon without repoising; of the Count, another good man even to Quesnoy-le Comte, who did not care to bite each other ".
During these two leaks of the left wings of the two armies, the centers were firing. The artillery on both sides had followed the road to Orleans, and could be deployed more easily than the French, confined between ravines and woods, and arriving in line. Also his right wing he commanded in person, having pushed his archers in front of her, the left wing of the French (see D) back to the first houses of the town (see D '). There says COMMYNES, eyewitness: "Those (archers on horseback) from the King led them PONCET of the RIVER, and were all ordnance Orfovérisés and well in point.The ones costed by the Burgundians were without order and without command, as volunteers ".
They had come from a breath through the field of Longjumeau: "If the skirmishes began ... the number of Burgundians was great, and they took a house, and took two or three huis, and used them as walls. to enter the street and set fire to a house (see in C) the wind served them, which pushed the fire against those of the King, who began to cling and ride horses and to flee, and on this noise and cry , began to walk and flee (continue) the Count of Charolais leaving, as I said, any order divided screen ... "

"All the archers of the said Count walked on foot before him in bad order, how much my advice is, that the sovereign thing of the world for the battles, are the archers, but that they are thousands, because in small numbers are worth nothing, and that they have gone up badly, that they have no regrets for losing their horses, or at all having none of them. "
When the Count's attack had thus driven back the French left wing, the men-at-arms of the King rallied, divided themselves into two troops, and, overflowing the line of the archers, tried to attack the Count's cavalry. The latter, instead of waiting for it, passed all through his own archers and thus took the French cavalry on the flank while it was operating, cut it and put it in the greatest disorder, so that it turned her back, and was so strongly urged that she could not get up.
The left wing of Burgundy was weaker than the right wing of the French, who on this side always arrived. It was sunken, separated from the center and thrown back into the woods and along the barley. The French, to obtain this result, seemed to have supported their attack on the little village of Chapelle-Villiers.
This strange battle, in which both parties were victorious or vanquished, is, however, of great interest. They are no longer masses who collide head-on. The field of battle was good, well chosen, and allowed each of the armies to obtain a decisive result, because each of the victorious wings could have fallen back on the center. But the right wing of the Burgundians, having the first depressed the French left wing, could have obtained a brilliant success by letting its archers keep the enemy defeated, on this point and by flinging flank on the center of the artillery . CHARLES liked better to pursue his partial victory while his left was crushed.
But if the success of the battle was thus shared, its consequences were to the advantage of LOUIS XI. The Burgundians were now unable to block the way to Paris, and they spent a very idle night in Longjumeau: Believing to be turned by the French right, it was not, however, LOUIS XI did not want to risk a second battle, and the Burgundians were able to return where they had come from, while claiming a victory with no other result than the loss of two or three thousand men.
It is no less obvious that tactics were changing. The wings of the armies became mobile, and could act. while the center reinforced by the artillery, kept its positions. But the infantry, which hitherto had been used only as skirmishers, archers, crossbowmen, or who had been able to oppose to the attacks of the cavalry, in open country, only compact masses, without initiative, as with the battle of ROSBECQUE, in 1382, was in line, beginning to form in battalion as good for the attack as for the defense.
In fact it was in MONTLHÉRY that for the first time was used the artillery. A note from the archives of the Department of the North reports on the use of arms by the Count of Charolais in this battle.
"On July 16th: 5 powder kegs for serpentines and ribaudequins: 1 500 pounds of plums or small lead pellets July 17th and 18th: a barrel of powder and 100 pounds of plumets During the three days: 223 barrels and spears, 154 vultures, 360 spears, 1,800 bows in hand, 38,400 arrows, 700 dozen bowstring, and seven bronze serpentines burst during the battle. "
The town of MONTLHÉRY had suffered much from the confrontation, part of the houses was burned and destroyed. The inhabitants felt for a long time this terrible struggle because Roy LOUIS XI, did nothing to compensate them, nor to raise them from the losses they had suffered.

This plain called "the battlefield" remained uncultivated for centuries. Only remnant of the terrible event, remains this cross , probably built by the Knight Bayard (Pierre Terrail) in memory of his grandfather who died during the battle. We can read today on the renovated plaque:"
Posted by Bedford at 12:18