I've just taken delivery of a set of rules that I bought off a very kind chap from Cheltenham, Setting the East Ablaze. I was advised by North Star Nick that they would be very good for the North West Frontier and having given them the once over I have to agree. They are quite slick but subtle enough to allow for any tweaking that may of may not need to be done. 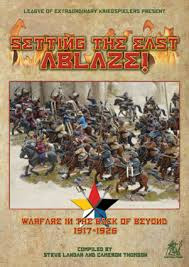 I'm just finishing off the first five chaps from the Artizan Brits NWF range from the following packs:

They're soon to be followed by a five more (all done in my spare time- which is proving to be harder to attain these days).