Chain of Command Jump Off Markers for North Africa?

I've just seen Matt of The Wargames Table Blog's excellent post on some beautifully subtle Chain of Command Jump Off Markers (Pic below)  and it set me to thinking...... I'm going to be doing my Chain of Command forces for the North African campaign using mainly Perry Miniatures and i wanted something just as subtle for my own Jump Off Points. It's easy to picture a burned out tank or a rusty piece of kit left to rot in the desert but they would in all likely hood be too large for the bases which have to be reasonably small from what I have gathered(?). 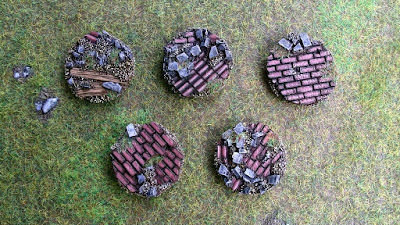 I've been racking my poor brains and I just can't think of anything but sand!! I suppose I could have a discarded 3" Mortar but that seems like an awful waste of the rest of the pack. Would a rusty Universal Carrier fit? I just don't know at present......

I am open to ideas if anyone out there has any?