Until last evening it had been many years since I played a game of WAB. I was feeling quite excited having been invited to play in a 'Dark Ages' game using the Shieldwall supplement.  After having played Shieldwall WAB almost continuously for a few years at my old club in Edinburgh at SESWC I had reasoned that it would be like learning to ride a bicycle again and it would all come flooding back. Wrong! At the end of the day I was very rusty indeed.  Luckily Matt Boyd et al were at hand to walk me through the rules again. I was playing the 'mercenary' element on Jim's Norman army. Facing us was a very well equipped and seemingly large Anglo Danish force! The game was really a kind of run through for a display game that Matt, Jim Giles and Martin's Holy Island game that is hopefully due to make it's debut at Partizan in May this year. Fingers crossed for that. In case you had not guessed their display game will not feature Normans but Norse (Vikings). If the terrain they have made is anything to go on this will be one cracking display game.

As I was saying, for many a year, almost weekly, a group of about six or seven of us met at SESWC and battles it out with 2000pts worth of Shieldwall armies. There were Normans, Scots, Carolingians, Thematic Byzantines and Late Saxons. I have happy memories of some absolutely brilliant games, some nail biting some hilarious to the point of virtually rolling around on the floor. The WAB Shieldwall supplement is up there as one of my favourites but I have to say that my preference is for El Cid and Age of Arthur. For me the army lists are the most balanced of all the WAB supplements  without losany of the the flavour that WAB adds to Ancient and Medieval games. Still, Shieldwall is a great supplement and a lot of fun.

The Saxons started securely on a slight gradient overlooking the Normans. The skirmishers take time out practice on the of Celtic cross in place of the "hoary apple tree" that once stood in its place. 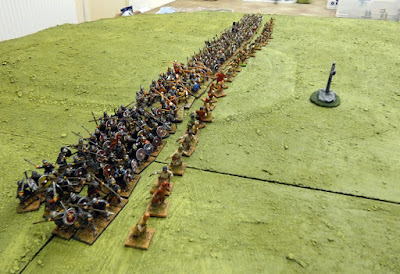 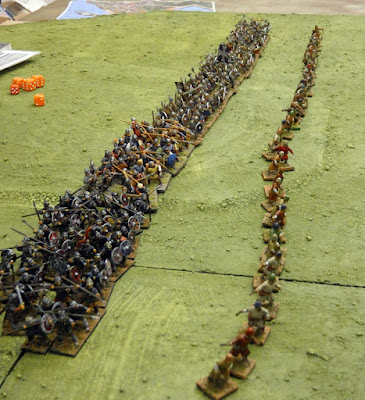 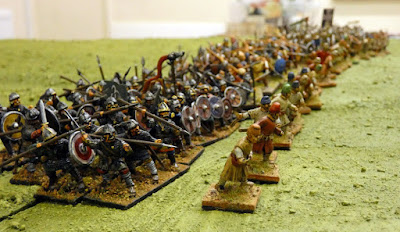 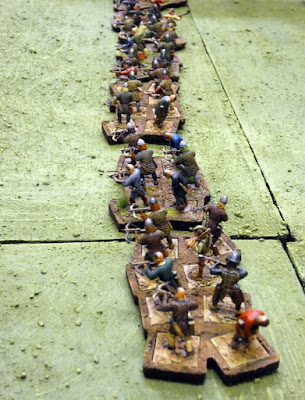 A view from the left side of the Saxon flank as the Norman Milites advance at a trot. 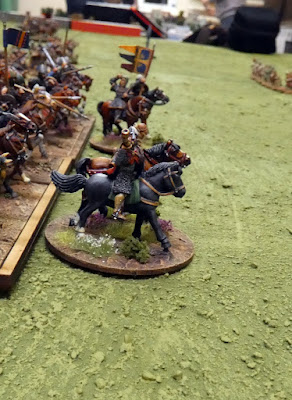 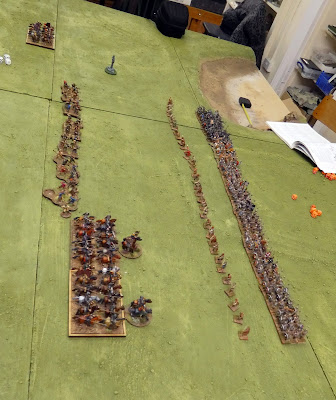 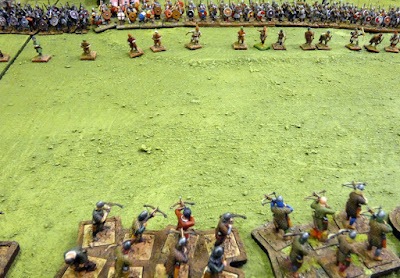 The Saxon Huscarls (Toughness 4!! and in Sheildwall!!) prepare their lines of scrimmage as the Normans close with nought but belligerence in mind. 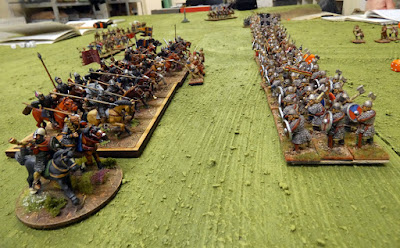 By now nearly all the Saxon skirmishers had been shot to pieces and legged it. A small but necessary measure on the part of the Norman Mercenary Crossbowmen. 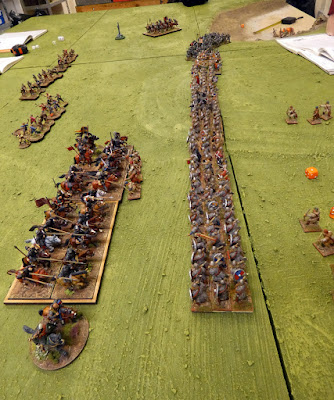 With the last of them to be finished off with grim efficiency. 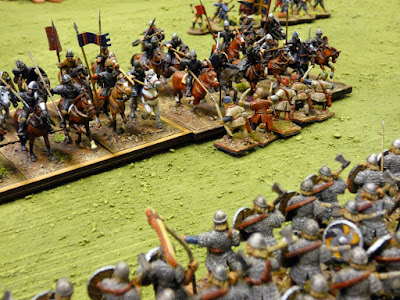 Duke Ivorclub (sorry, best I could do) has his man sound the horn for the charge! 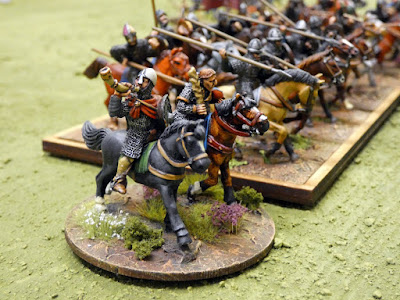 Cruuuunch! The Norman knights clash with the Saxon Huscarls! (Did I mention they were Toughness 4 and in Shieldwall?!?) 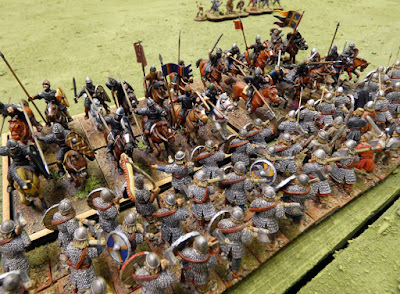 The cream of Eangla londe real from the Norman onslaught but recover and strike back with renewed vigour and malice! 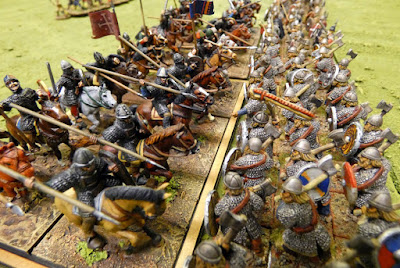 A unit of Huscarls swings around and hit the Norman Milites in the flank; suddenly things start to look ugly for the Gallic speaking Norsmen on their rough cuddies! 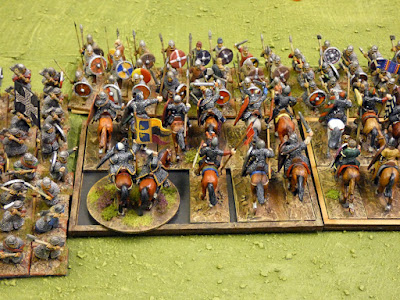 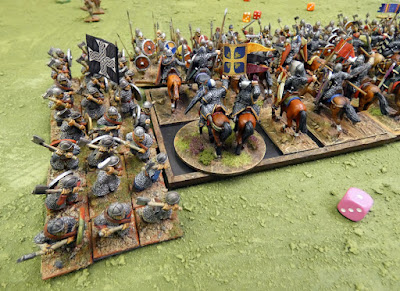 Nothing in that rule book can save us now Jim! 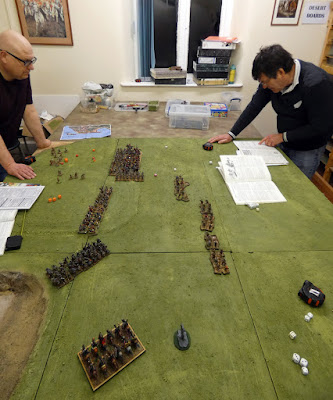 All the while, my unit of Devroet had sat on the Saxon flank wondering if they had it in them to do any real damage. 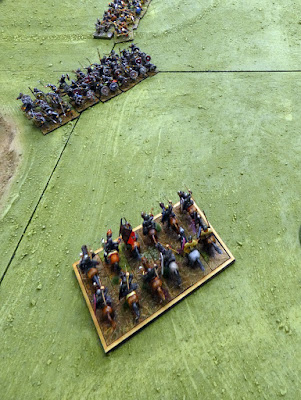 The Normans beaten to ghastly pulp by the Anglo Danish Huscarls wielding, wait for it..... their large choppers! 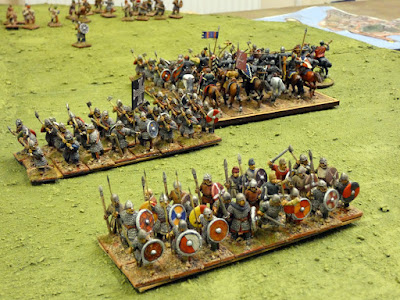 Great to see everyone in the other room still making a fist of it. 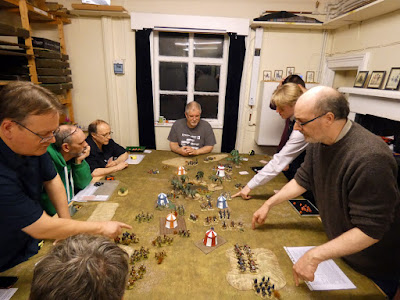 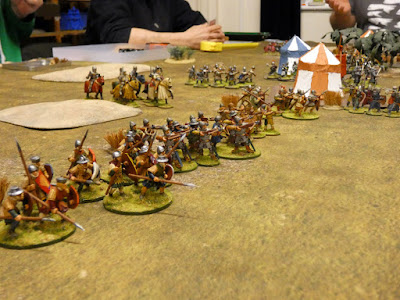 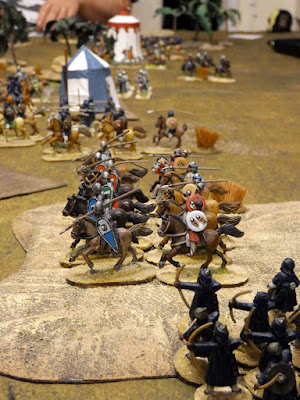 Until last evening it had been many years since I played a game of WAB. I was feeling quite excited having been invited to play in a 'D...