Last evening saw my good self and Paul Stephenson getting together for a rather special game of WAB. A historical possibility had Edward IV actually done any fighting in France in 1475 but definitely a "What If" game. It was a straight fight.

The Burgundians were fighting with their English allies and the French had (rather cheekily) mustered in the Swiss to stem the growing power of Charles the Bold (actually Charles the Rash in Medieval parlance) and that of the new Burgundian army.

The miniatures were all supplied by Paul who's collection is quite vast. Rules used were WAB V2 with appropriate army lists drawn from Armies of Antiquity V2 (of which I don't have a copy if anyone reading this wants to sell me one?). 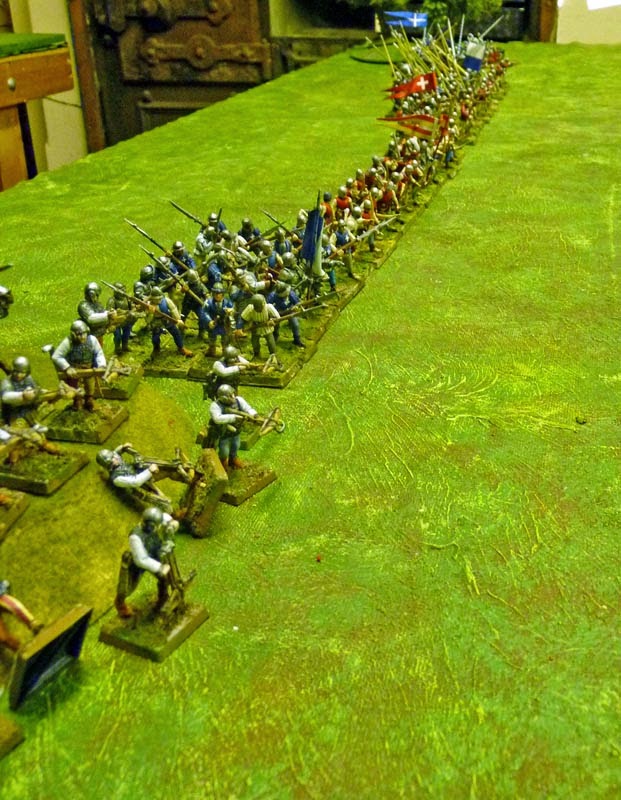 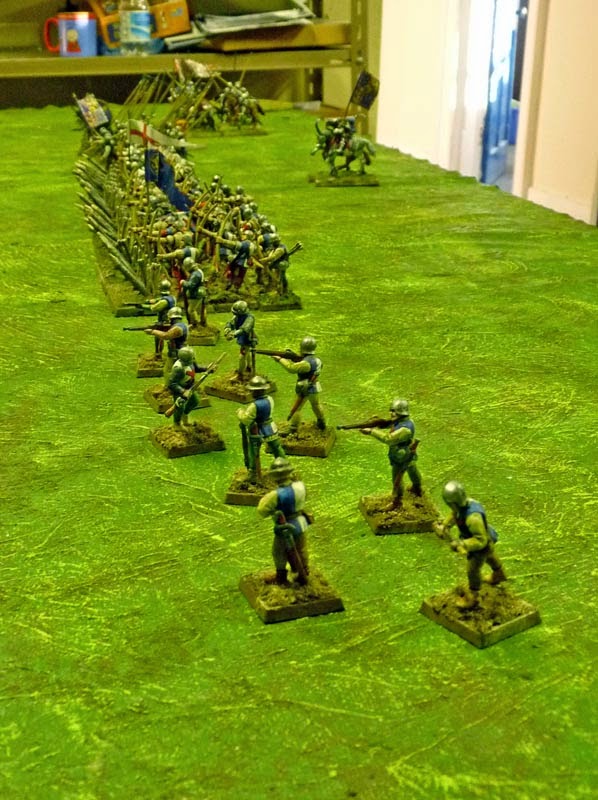 Close up of the Burgundian Handgunners: 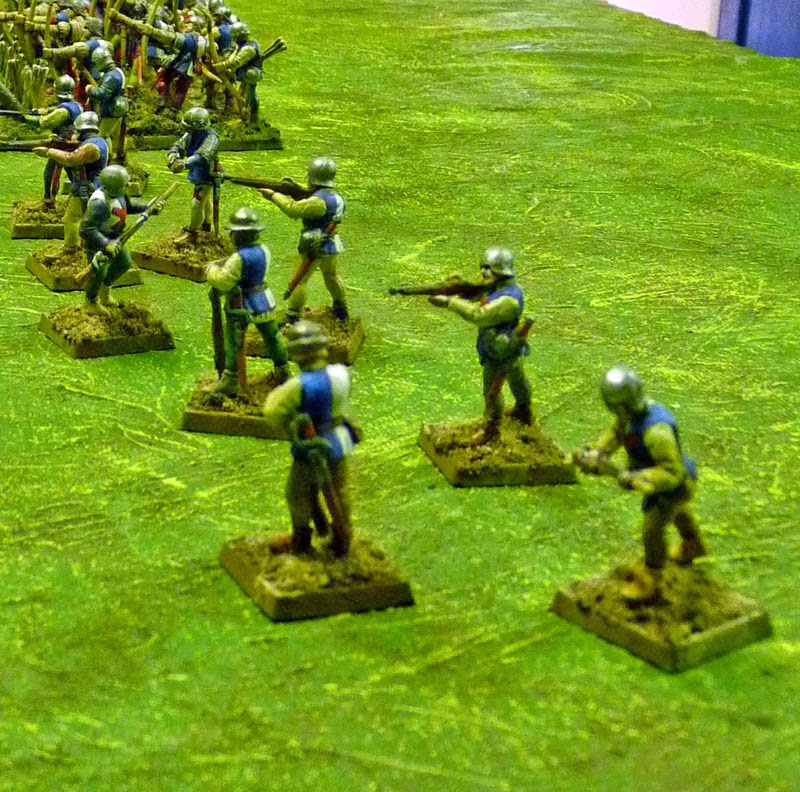 Both Armies arrayed:
Tape measure and three dice acting as referee is would seem! Opening moves:
Both armies throw out their skirmishers and start to advance. The French push forward two cavalry wings supported by infantry. The Burgundian pike advances supported by the Burgundian archers. Alas, the arrogant English do not unleash a volley as they wait to out do their Burgundian imitators! The Francs archers make a bit of a hash of it as per usual! 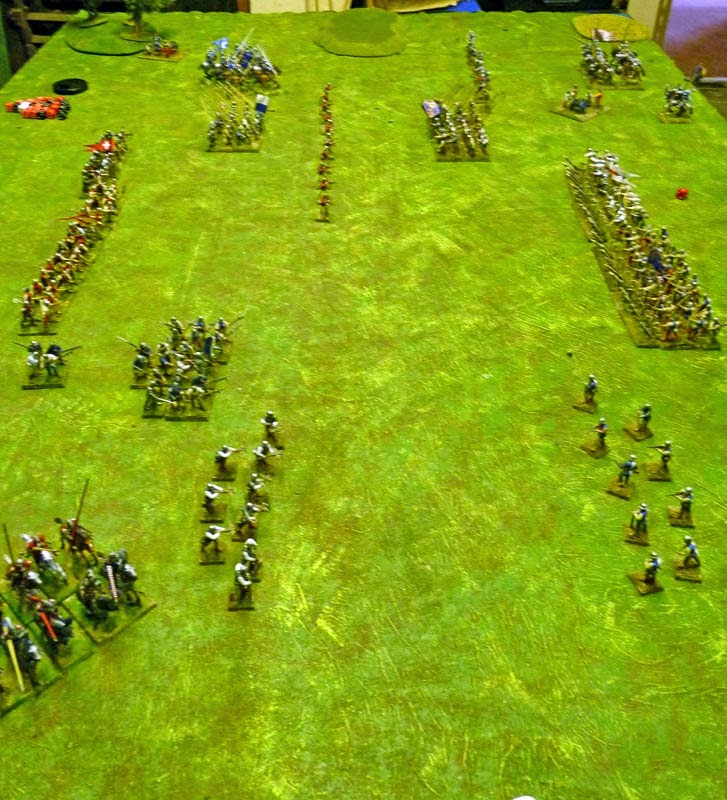 A storm of French Nobility head towards the enemies lines on right flank as another does the same on the left: 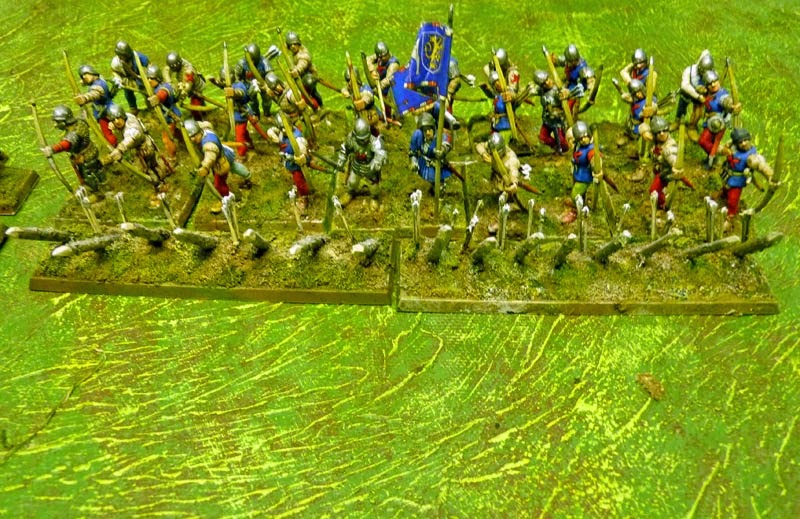 Pike squares Advance upon one another!
The French Mounted Men at Arms close in on both flanks. 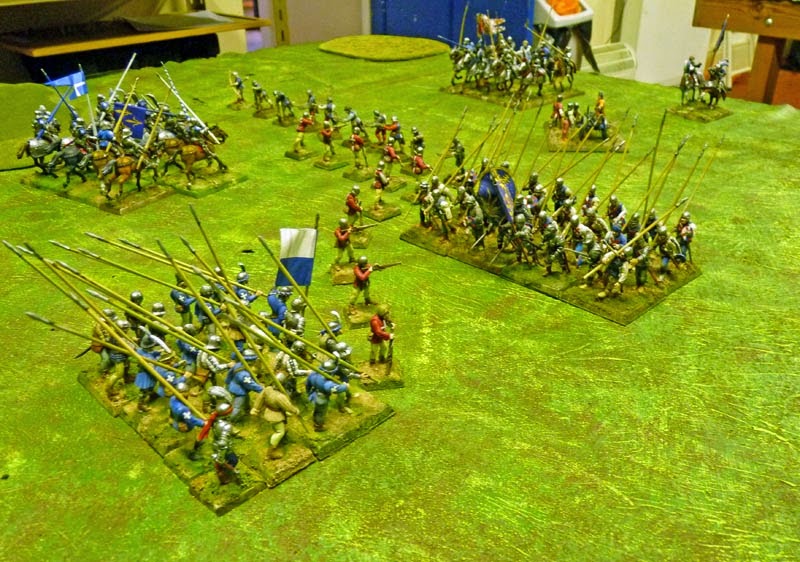 Left Flank:
The French Mounted Men at Arms including the Army Standard Bearer and General swoop aside the Burgundian skirmish screen and confront their equals in a duel to the death! 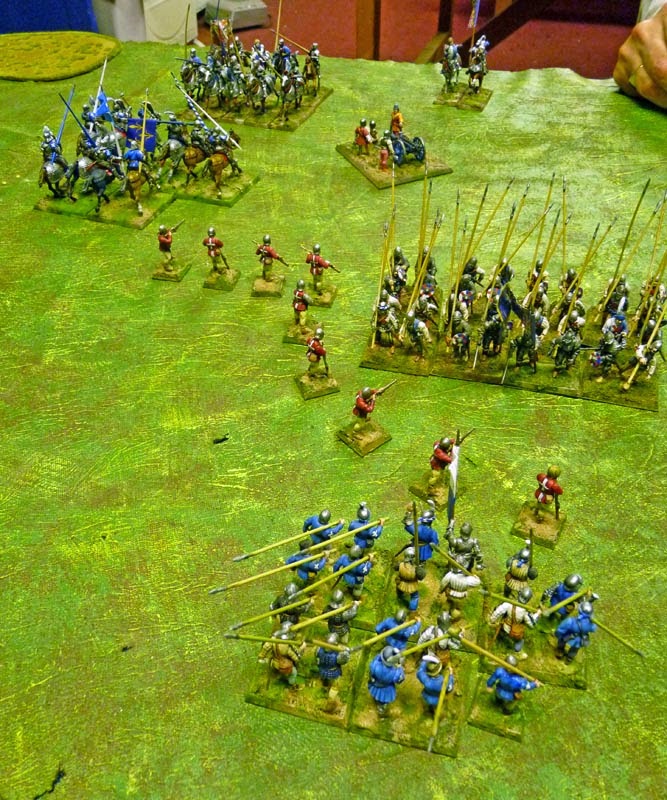 The Clash of Pike is Sickening to Behold! 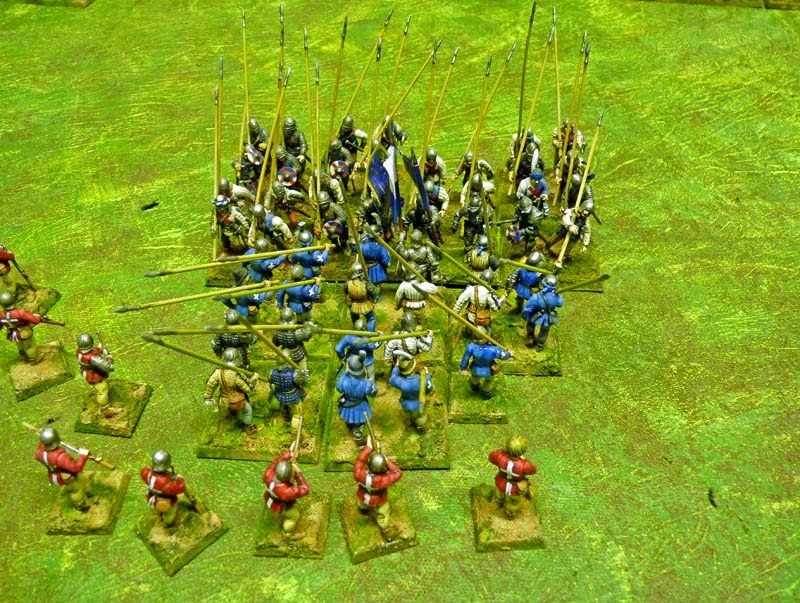 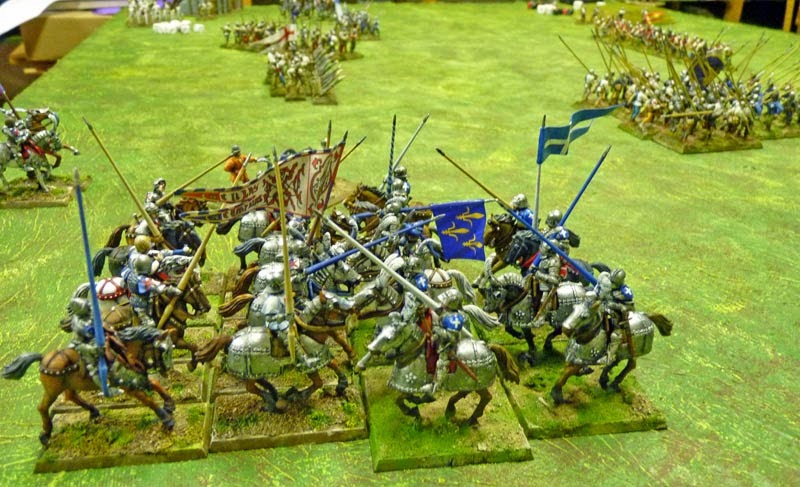 Miraculously the Burgundians survive the best efforts of the French nobility as they route the Flower of France and run them down!
I had to take at least two gulps of water at this time as I was the French player! Oh dear! 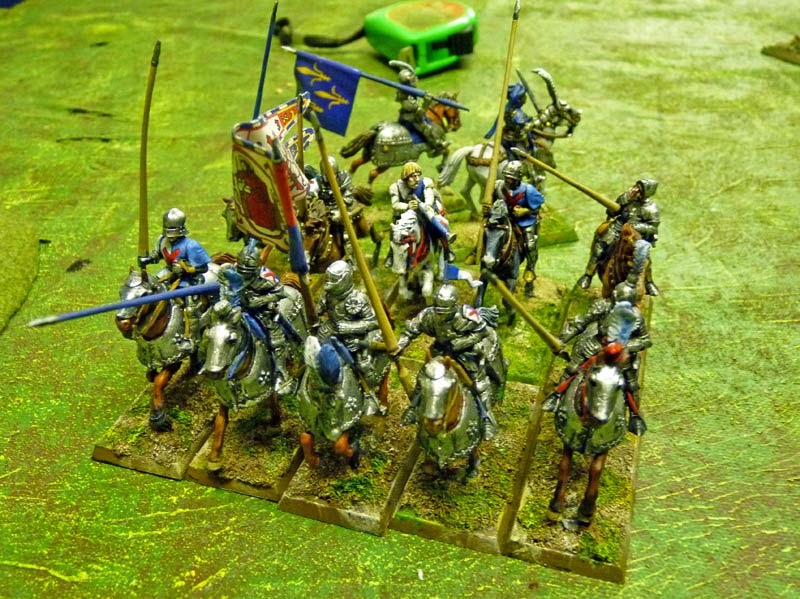 After losing the unit of knights, my Army Standard Bearer and my Army General I reached break point after just one melee! The genius of Darrell on the field of battle continues! :>) Paul was nice enough to let us play a one more turn so's i could at least get stuck in with my Pike and infantry on their respective flanks! Both attacks were successful but woefully too late! 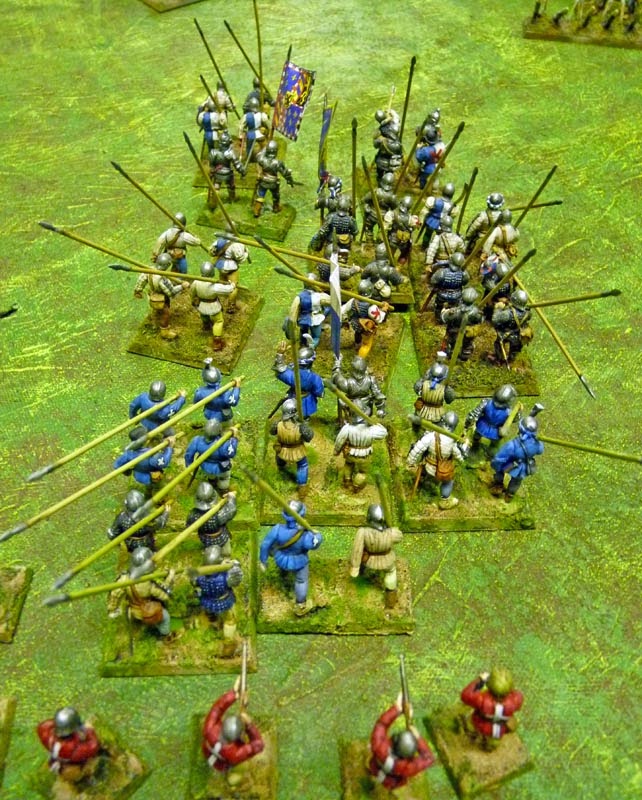 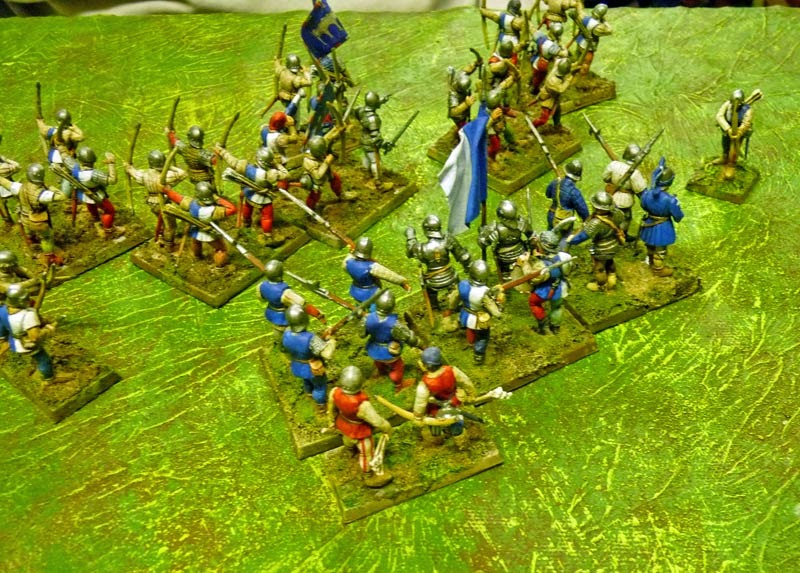 All in all, a great fun game. It's always a pleasure to play Paul, who seems to be on my wavelength when it comes to taking games none too seriously- though I must admit, tactically he has the better of me! Just don't tell him so!

In one of the other rooms there was Part II of what i assumed was a Seven Years War game(?). anyway there was a fine array of Garrison et al miniatures on display from yesteryear so I took some sneaky pics before they resumed the game. 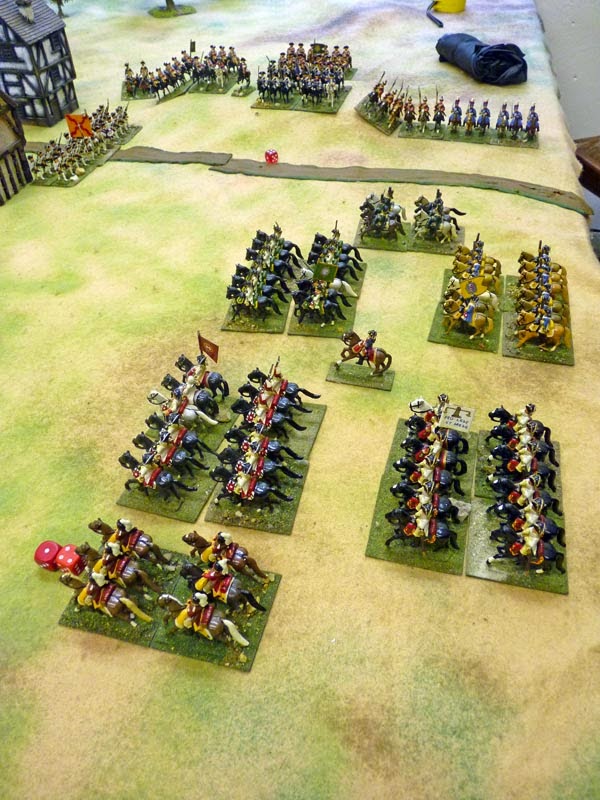 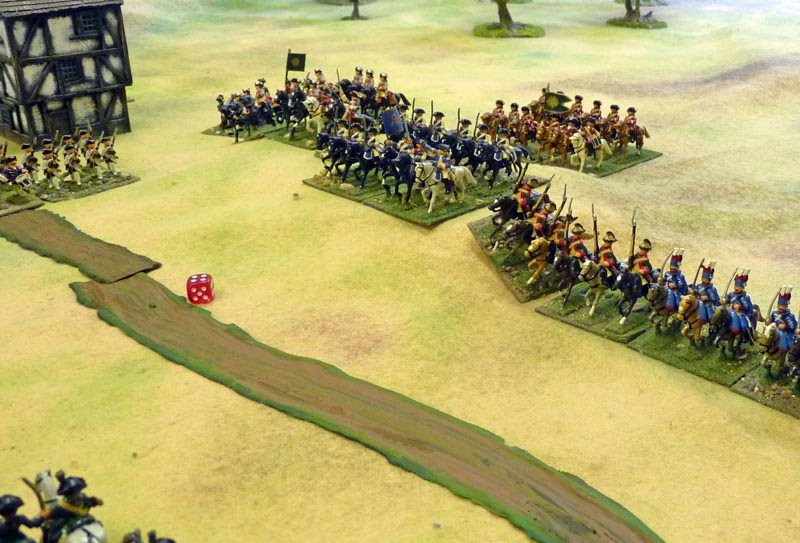 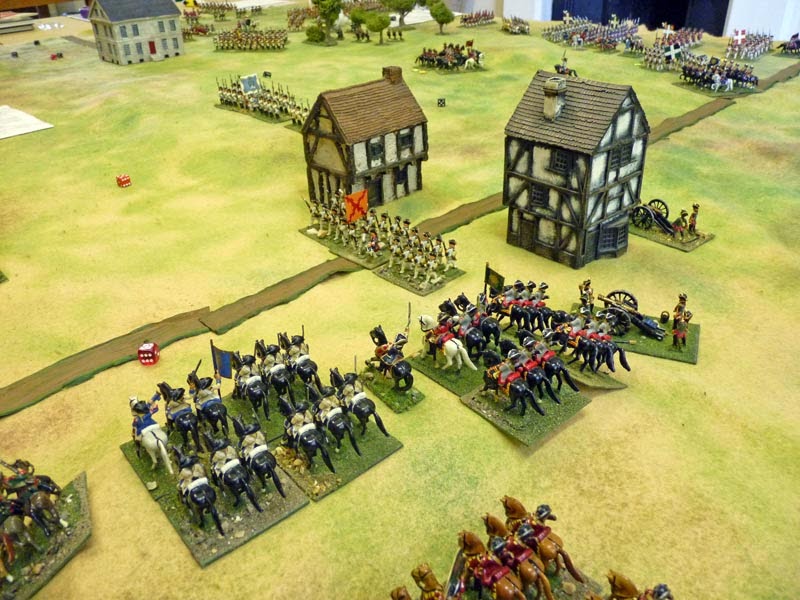 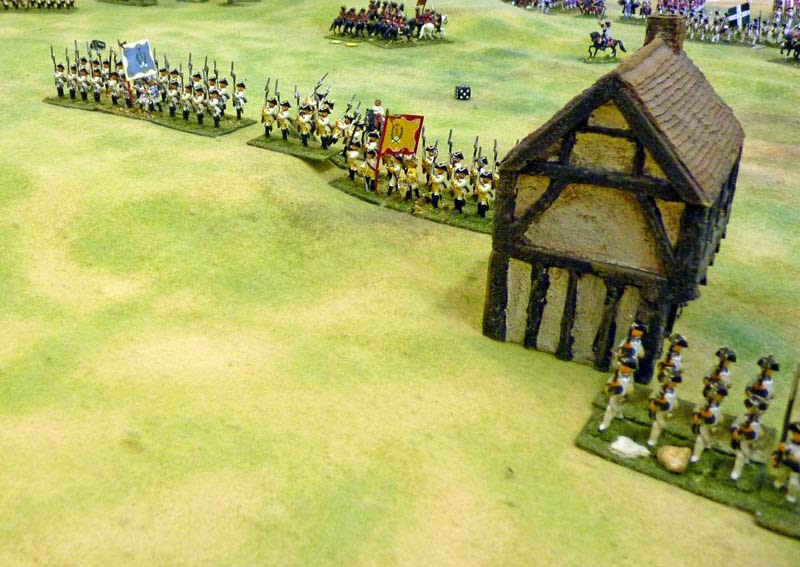 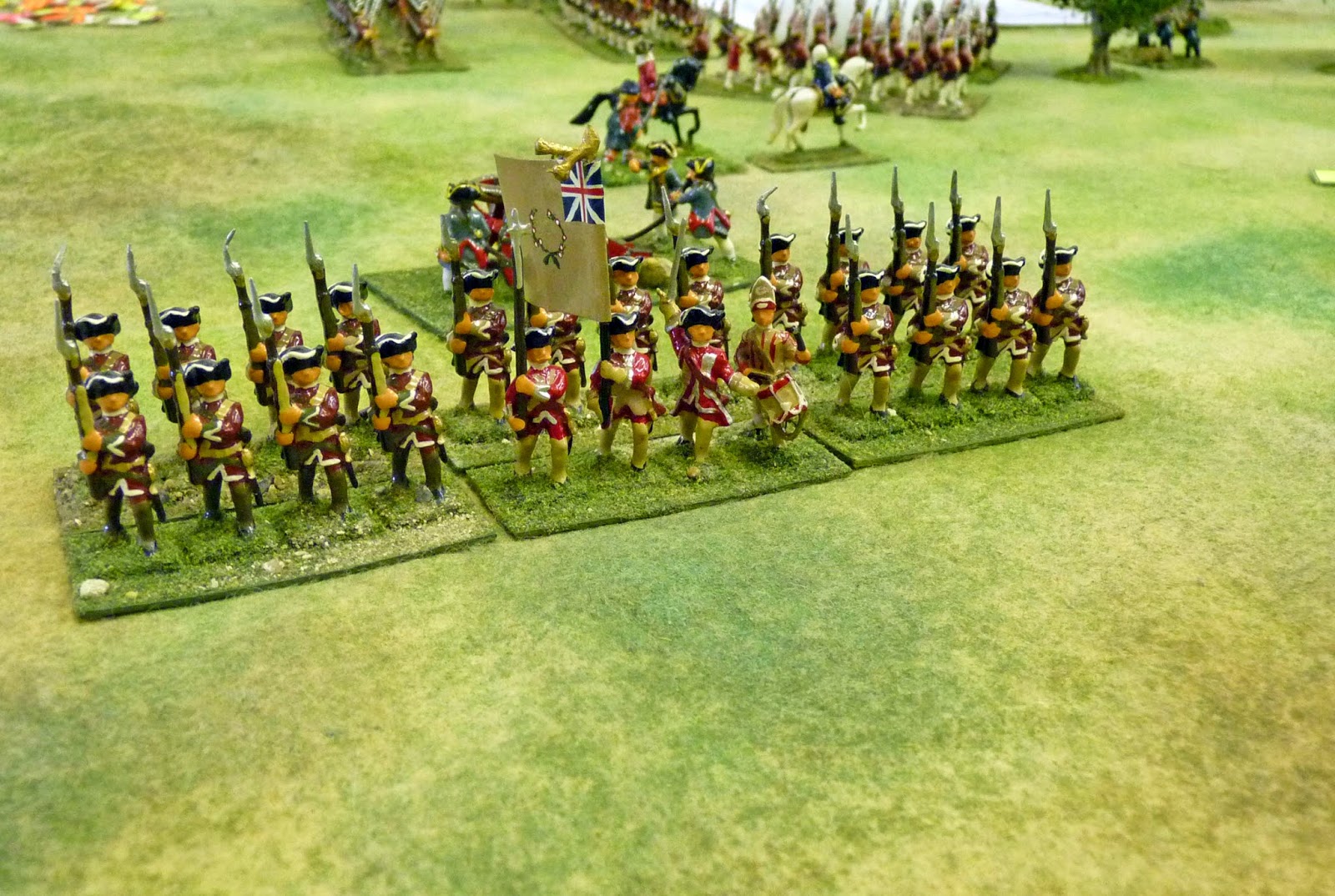 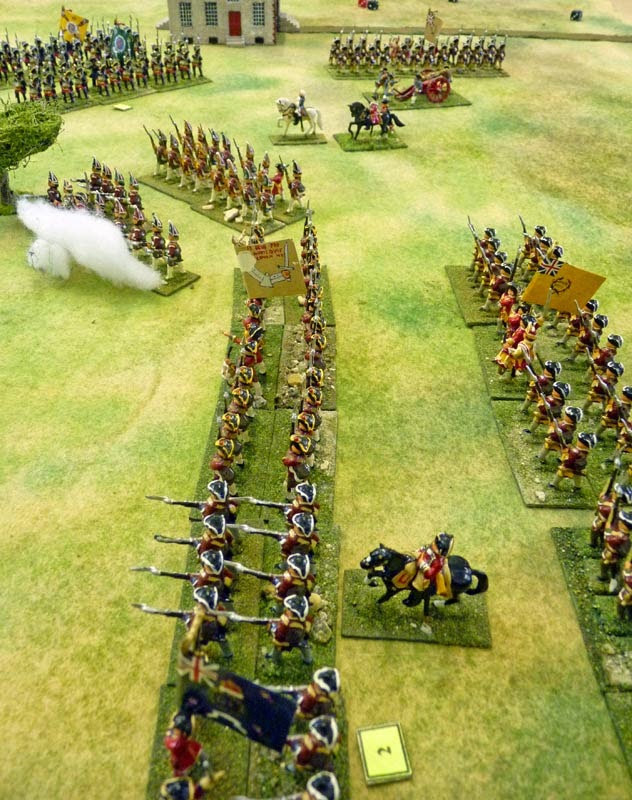 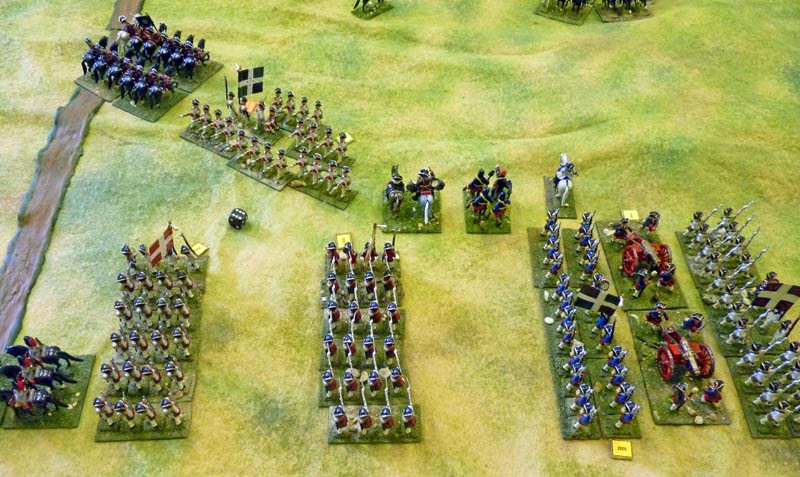 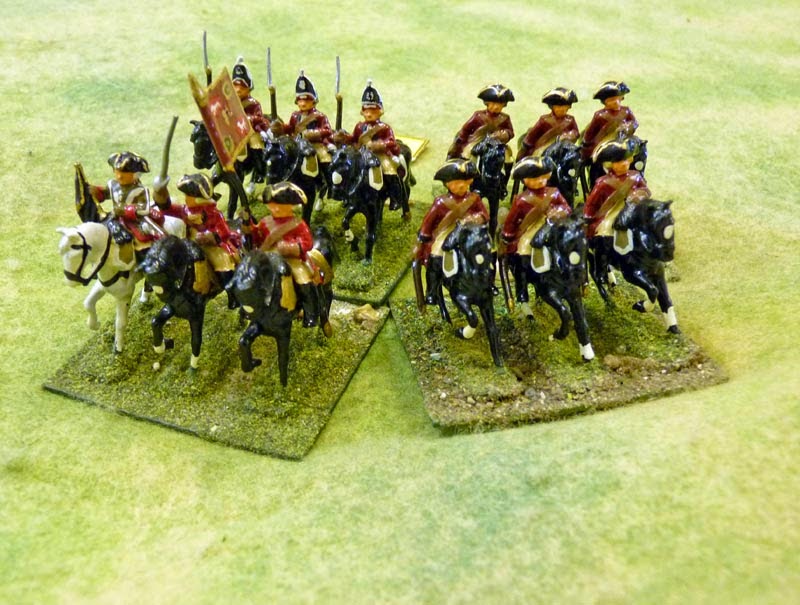