Thursday gone saw Mike and I team up again as the (somewhat vulnerable) Islemen but this time taking on Jim and Neil with their English. The scenario was to be Hammer and Anvil, a situation that the Islemen and their lack of armour are not superbly equipped to deal with when facing archery and Mounted Men at Arms.. However, the tabletop was covered in woods and thus we were not too disheartened as we would be able to make use of the woods, hopefully inducing the knights into a Wild Charge, having them stuck in the woods and bringing them into melee with our Fierce Foot and possibly reducing their prowess by loosing missile after missile with our Bidowers.

I should add that the aim of the scenario was for Mike and I to move our troops off two diagonal sections approx 18" across on the opposite corners of the table. We played the scenario out with split retinues of roughly 12 points a piece.

Our Right Flank- Mike's Set Up:

(I seem to have neglected to take a pic of Neil's deployment of his English but they were to come on just behind us more or less to  Mike's rear!) 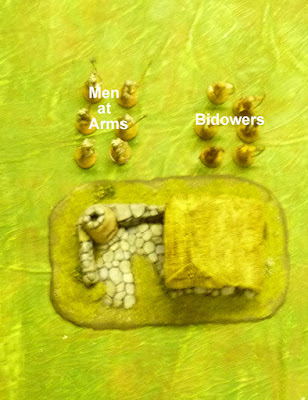 The Tabletop at the Start of the Game: 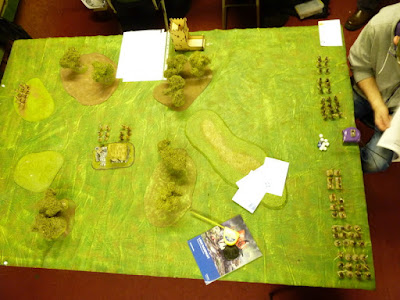 Jim's English archers took up position on the hilltop blocking our way to the table opposite edge. 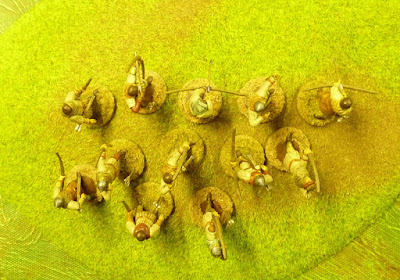 Mike's Islemen move forward. mine decide that discretion is the better form of valour and stay put (ie I failed to activate a single unit. Not ideal when you have a burly unit of Mounted Men at Arms hammering onto the tabletop in the English turn Two! 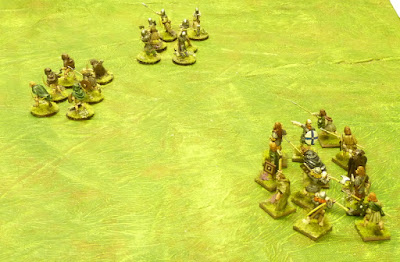 "Thus come the English, with full power upon us" (to be read out aloud in Medieval Scots!). Neil's English Sergeants huff and puff trying to keep up with the Mounted Men at Arms! 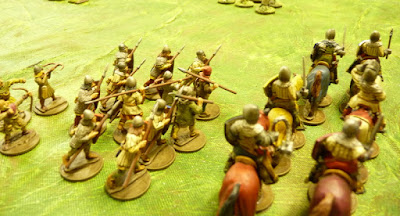 The horrible result of bad dice activation rolls and Fierce Foot having to deal with the 'eavies! Mike's Fierce foot timidly retreat after receiving a mauling. 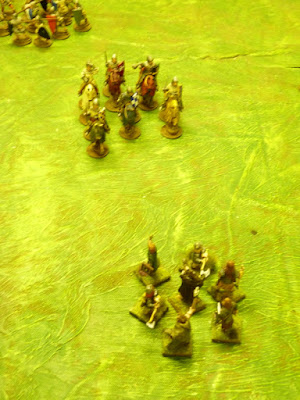 Just about the only unit that I managed to activate makes a mad dash for the opposite side of the hill to the English Mounted Men at Arms! 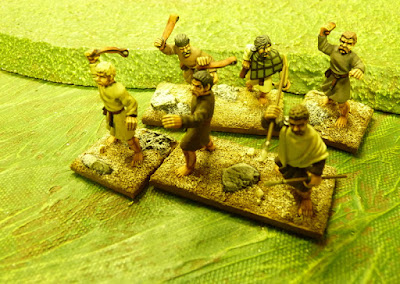 Jim's deploys his English Longbowmen as he awaits the arrival of any survivors Mike and I may have after Neil's Mounted Men at Arms have finished ravaging behind our lines. 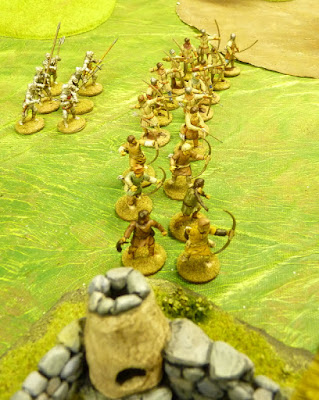 Mike, who was receiving more than his fair share of 'Islemen luck' (TM) managed to get his Foot Men at Arms and a unit of Bidowers to a wood where neither Neil nor Jim could reach him. Probably not in time anyway! 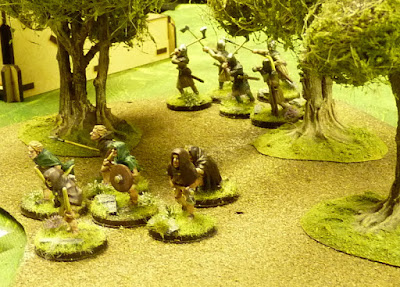 A unit of my Timid, oops sorry, Fierce Foot that seemed destined to stay exactly where they started the game! 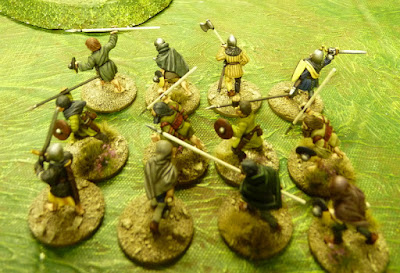 One of my Bidower Units, seeing the carnage behind decide to leg it off the table. This counts as a route which plays into Neil and Jim's hands in terms of victory conditions but as we roll for casualties after each game in a season (random number of games) it seemed the better option to live to fight another day rather than face Neil's Mounted Horrors! 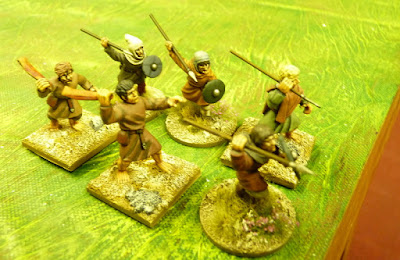 Prior to the early exit of the above unit of Bidowers I had feigned running off the board with my two units of Bidowers, a ruse that was to actually prove useful as Jim stayed his hand in moving the English Longbowmen over to my side of the board just long enough..... 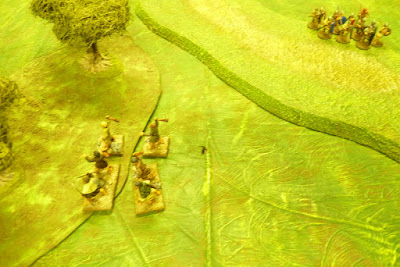 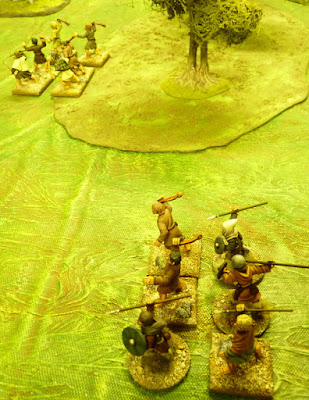 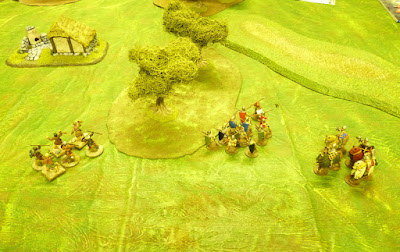 And ran.... all the way to our objective, the corner of the table. The result being one unit of Bidowers off the table at exit point and one Glory Point to me! Doesn't sound like a lot? Well, I'm in negative equity as far as glory points are concerned so it was a moment to savour for me :>) 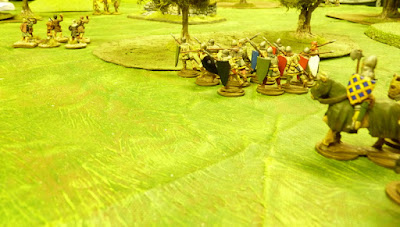 Mike also managed to get his Bidowers off the table at the requisite exit points but with the units that had routed, voluntarily or deliberately we lost the game by four Glory Points which Jim and Neil. A but of a slow game but looking back it was more fun than it seemed when I kept failing (and failing again) my activation rolls for my entire force!

So, with a random number of raids left in the season I'm determinded to stick to the ethos of the Islemen list, ie lots of light troop types (Bidowers, Fierce Foot) and probably only one unit of men at arms. I've got a unit of the rather beautiful Claymore Castings Highland Archers primed, undercoated and ready to paint but I'm going to try to finish of the Fierce Foot and Bodowers first- I've still got 24 models to go! Thanks Thoth that the Gripping Beast British and Welsh Kingdoms miniatures don't make bad substitutes for the Highlanders!