Thursday gone saw the resumption of our Haggis Rampant Campaign. This time it was Mike and I, with our Islemen Retinues facing off against up Sweary Nige's(TM) English. We rolled for the level of the raid and again for the scenario which turned out to be Blood Fued! Excellent I thought, the perfect scenario to get my leader, who carried the stigma of the Insipid trait killed off and have a chance to roll for something decent! Not so, Nige had to kill me leader to gain the full glory points and I had to try to stay alive! Just my luck, or was it?

Mike's boast was to get one of his units off Nige's table edge but my Insipid Lord was to prove to be deliciously aggressive in the particular game. Not that I wanted him to die of course- oh no ;>)

And that of us Raggedy Islemen:

Nige moved his Mounted Men at Arms down our left flank aggressively at speed in order to bring my Men at Arms and ultimately my leader to force of arms. It was no surprise that my Fierce Foot with their Fleet Footed ability were to head to the woods to try and entice his Mounted Troops into a ( very silly) Wild Charge in order for them to get stuck in the woods fighting a losing battle. This kind of backfired as my Fierce Foot proved to be apathetic and rather tame in failing their activation rolls twice and steadfastly refusing to move from the spot! Luckily I had rolled for my Men at Arms on Foot prior to rolling for my Fierce Foot and they were able to get into a position where they could 'block' Nige's Mounted Men at Arms. Or were they moving there quite deliberately in order to get their (damn) Insipid Lord into a hopefully fatal challenge? We will never know ;)

Meanwhile Mike moved his troops up the table on our right flank hoping to get into a position where he could proudly boast that he's run across the table width ways! On Nige's next turn he continued his aggressive tactics racing his Men at Arms in front of his (Death Ray) Longbowmen for the latter to take up position where they could launch their devastating volleys. His Men at Arms were now within 12" and it would have been rude of me (if not insipid!) not to follow up his aggressive moves with equally chivalrous behaviour. Thus it was that Thomas de Thunbe, my lord, challenged him to trail by combat. Nige got three hits on me and I managed only one. One dead Thomas de Thumbe was the result. Was I unhappy? Not really LOL :>)

So, with the game effectively over half way between Turn Two; Nige had deservedly gained his full Glory, Mike never had a chance to make it across the table and I was in negative equity with Glory Points again! I now hold the esteemed title of having the lowest score in glory, not only with the Scots who have certainly suffered the "slings and arrows of misfortune" against their English protagonists but of both the English and the Scots! anyone who's smart can see that I've got a little bit of work to do! 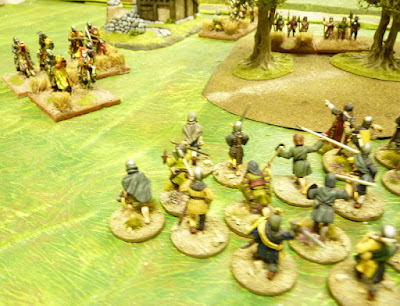 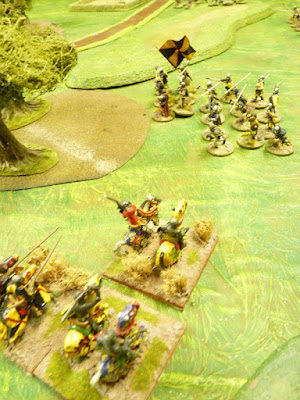 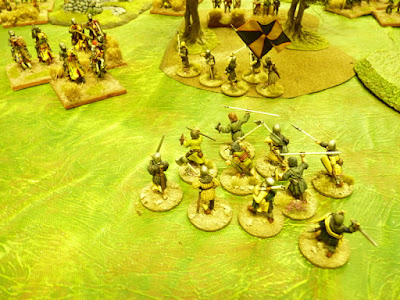 Mike heading up our right flank: 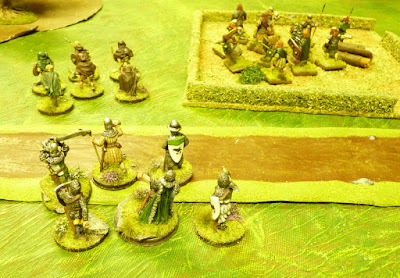 One of the proudest moments, aside from getting rid of Thomas de Thumbe was rolling 11 hits with my Fierce Foot on Nige's Mounted Men at Arms who scored only one hit! Slowly but surely my Feirce Foot eliminated Nige's Men at Arms until his lord was dead. It must at this point be pointed out that this counted for nothing as the game was over half way through the first turn! 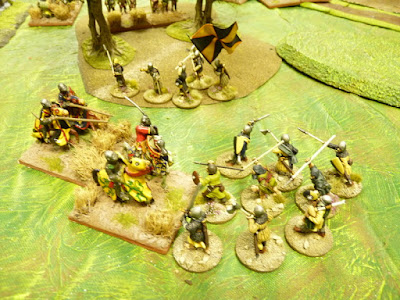 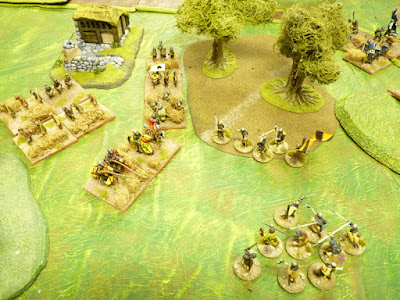 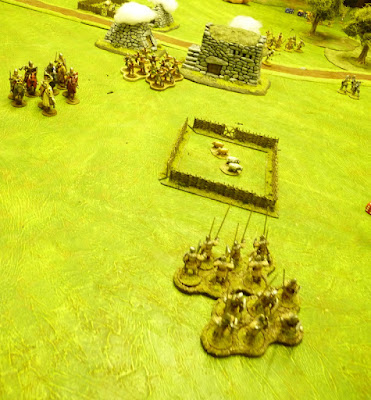 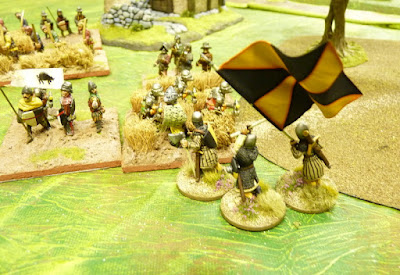