In the Osprey Campaign, Hastings 1066 it is suggested that there may have been late arrivals as more Anglo-Danes/Saxons made their way to the army of  Harold Godwinson. I'm taking a great leap of faith by making the assumption that the late arrivals would have more of a cross section of the troop types already on the scene of the fighting. in other words Fryd (predominantly Thegns?), Lesser Fyrd (Levies?) and Huscarls,not to mention the odd Ealdorman. 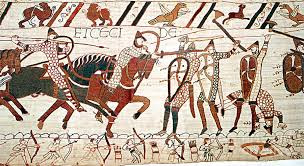 I will probably model these units (given enough time!) as at least in my eyes, it seems very likely that the hastily arrayed army would have hurried to the scene Senlac (to give it it's later Norman name) hill and thus a steady stream of late arrivals may just have been the case. in any event, with the rules for the demo game undecided, it will at least stiffen the Shieldwall and make the game last!

I'be be very interested in hearing from anyone who has any idea on the subject. Just post below and if you can muster a link and/or of a literary source too that would be just dandy :>)