Some of my Indian Mutiny Brits; 1st Madras Fusiliers or Neill's Blue Caps as they were known for their striking blue forage cap  covers.

The 1st Madras, being the only European regiment fully armed with the Enfield at the outbreak of the Mutiny, were involved in much of the early fighting as part of the Allahabad Moveable Column (under Maj-Gen. Sir Hugh Wheeler at Cawnpore and Brig-Gen. Sir Henry Lawrence at Lucknow) ultimately to be under the command of the now somewhat famous Brig-Gen. Henry Havelock arguably the first effective commander of an army in the Indian Mutiny.

Anyway, please forgive the paucity of miniatures in the pics, it was originally mean't for the LAF league which is about to start but I misread the rules and after being informed that I had to present three teams I decided just to post the progress of my Indian Mutiny stuff here.

Hope you enjoy the pic, I'll certainly be adding more images and some close ups of the miniatures will follow hard on the heals on this pic of Col. James Neill's Blue Caps :)

There will of course be many more pics to come of both the Blue Caps, more European and Indian army units and of course the Mutiny regiments/bands 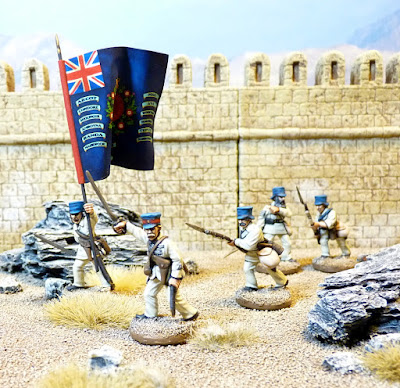 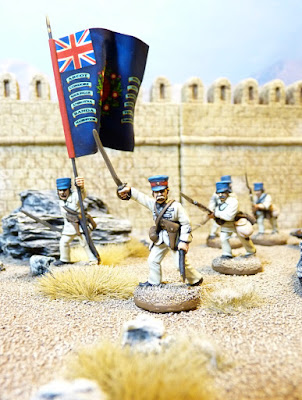