It's been in my mind a little; the so called Feigned Flight of (initially) the Bretons.... was this the case?

With the distance of the years it's an almost impossible question to answer. There is however another intriguing possibility.

To set the scene. The Bretons have panicked and with this a general retreat of William's army is starting to take hold. Harold, thinking the time is right to strike the killing blow orders a part of his army to persue. This is a very plausible scenario and one that may well have taken place. It would certainly account for the persuit of one of Harold's flanks into the boggy ground where they were to be cut down, probably to a man.

This does of course raise another question; who led the advance? From what I've gleaned thus far about the battle Gyrth and Leofwine, the two brothers Harold had present at the engagement seem to have died at a different point in time to Harold. Does this imply therefore that they were not with Harold's Bodyguard of Huscarls but spread throughout the battle line in order to stiffen the resolve of the Anglo Danes? If so (and with the actual evidence or lack of that we have I know that it's a big if!) then one or both of the brothers may have said the counter charge.

It certainly sets my imagination away. I can see a command vignette of Gyrth or perhaps Leofwine leading the doomed persuit in my minds eye. 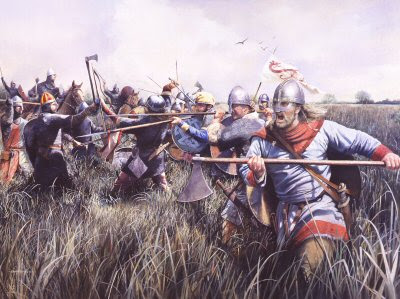