I've decided upon an army for next year's Swordpoint Medieval event in Swindon and settled on Burgundian Ordonnance. Hopefully it will perform a little better then Charles the Bold managed with his army against the Swiss!!

The first unit is going to be a unit of Burgundian Archers with the front rank of the unit to be made up of Pikemen and the last three with longbows. The Ordonnance Archers were well trained and drilled to fight in such a formation though whether or not it was actually employed on the battlefields of Grandson, Morat or Nancy is open to debate. Such battles were were often jumbled affairs due to the decisiveness, manoeuvrabilty and swiftness of the Swiss thus not really allowing for Charles's expensive well equipped army to fully deploy as he would have liked.

"Furthermore, my lord [the duke] ordains that, in order that the said troops, may be better trained and exercised in the use of arms and better practiced and instructed when something happens, when they are in garrison, or have time and leisure to do this, the captains of the squadrons and the chambres are from time to time to take some of their men-at-arms out in the fields, sometimes partly, sometimes fully armed, to practice charging with the lance, keeping in close formation while charging, how to charge briskly, to defend their ensigns, to withdraw on command, and to rally, each helping the other, when so ordered, and how to withstand a charge. In like manner they are to exercise the archers and their horses, to get them used to dismounting and drawing their bows. They must learn how to attach their horses together by their bridles and make them walk forwards directly behind them, attaching the horses of three archers by their bridles saddle-bow of the page of whose man-at-arms they belong; also to march briskly forwards and to fire without breaking rank. The pikemen must be made to advance in close formation in front of the said archers, kneel at a sign from them, holding their pikes lowered to the level of a horse’s back to that the archers can fire over the said pikemen as if over a wall. Thus, if the pikemen see that the enemy is breaking rank, they will be near enough to charge them in good order according to their instructions."

I will be adding feathered plumes to roughly half the miniatures in the unit to emphasise the fact that these were permanently employed as a professional cadre of Ordonnance Archers. As well as the plumes I have added few heads from the Perry Miniatures WR 60 Light Cavalry box and some heads from the WR 20 Plastic Mercenaries 'European Infantry' box sets and some metal plumes from the EA6 Swiss Heads pack. They have been pinned into place and tidied up with some (nice new) ProCreate putty with a bit of sculpting work thrown in. Bucklers have been added as well to give them the more homogeneous look of professional liveried soldiers. 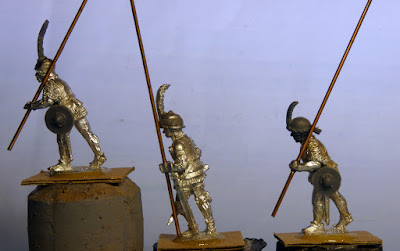 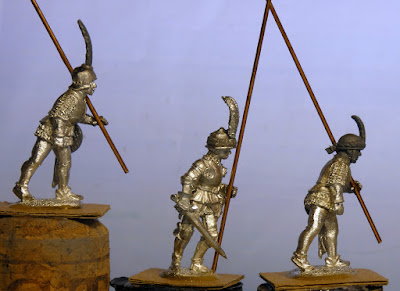 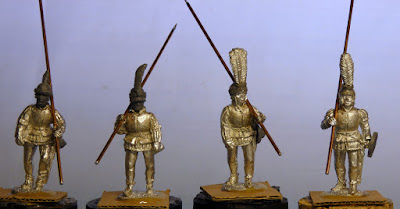 There are another five miniatures for the front rank but there was little point in taking any pictures as all I have done is added the bucklers and clued the pikes in place.
Posted by Bedford at 15:01 10 comments: