A few weeks ago I took delivery of some miniatures I had had my eye on for a while; namely a decent number of the new Aventine Miniatures Early Byzantine range. I splashed out a bit and bought a unit of Extra Heavy Infantry, two units of Armoured Infantry with archers for the rear ranks, two units of nomad Steppe Horse Archers and a unit of noble Steppe Warriors! Quite a haul really.

On receipt and the prerequisite inspection of the miniatures I was amazed by the quality of sculpting and the sheer depth of detail. Not only in the sculpting but the attention to detail in terms of additional equipment yet in the extent of the research that must have gone into creating the models. Aventine Miniatures are astoundingly good.

I'm going to do a review of the miniatures as I collect them so that will have to be a topic for another post but please, take my word for it when I say that these miniatures are superb.

OK, onto the painting! The first twelve models of the unit. One thing I had to bare in mind was that I was painting these miniatures for the table top en masse, thus I needed to take a few shortcuts such not painting in eyes and instead leaving black areas where they eyes settle on the face, dry brushing metals instead of painting in each scale. (I once had a GW High Elf Army in which I had religiously painted in very scale on each model. The army took several years to complete!! Crazy!)

Due to certain health concerns I predicted that I was simply not going to be able to get out of the house to get to my usual usual suppliers for paint etc and it wouldn't be long before they to be temporarily closed so I managed to grab five Army Painter matt black undercoat via the net just prior to the lockdown. Happy with this I then cleaned and primed the miniatures only to discover that the after spraying carefully the surface was glossy and the primer had pooled! Not a great start! (Those Army Painter Cans are now relegated to use on terrain only). I have a couple of cans of Halfords Matt Black Enamel which was a godsend this saved me from hand priming mini's with Humbrol Matt again. It's not that I dislike using Humbrol Matt Black Enamel, it certainly has it's uses. It is bit of a faff on applying it and to be honest the company changed the formula somehow quite a few years ago and the stuff has not been as good since. It's a bit like comparing the old Testors Dullcote to the new stuff. No comparison in my humble opinion.

I did have a jar of Golden Acrylic Black Gesso, which always leaves a very flat, very matt surface on the miniature so I was able to salvage the next batch of four which was a huge relief. You might ask, why not just use the Gesso in the first place? The reason is that although Gesso gives a brilliant flat matt finish that really accentuates the details on a model,, it is quite a fragile coat and can be brushed off quite easily. Thus I prefer to prime with a spray primer before applying an undercoat, which could be Gesso or Vallejo Air Matt Black 'Primer' which is really an undercoat.... but I digress.

The mail was simply a dry brush of of Citadel Bolt Gun Metal (or equivalent) darkened with VMC Matt Black, then Citadel Bolt Gun Metal, then Citadel Iron Breaker and lastly Citadel Runefang Steel. The whole thing was then given a wash of watered down Nuln Oil. This I may have applied to thickly and next time the mix will contain a little more water. It is important to dry brush each layer with a slightly more deft touch each time only brush the lighter tones on the highest of ridges (if any) on the armour. If i remember tomorrow I'll take a few snaps of the metals and colours in order of use as a visual reference is a most often lot easier to remember.

For Iron and Steel I have stuck to using Citadel paints over the years as I have had no problems with coverage or inconsistencies in the pigment. I have used Army Painter Paints which are much smoother and have a good amount of pigment but I was going to be dry brushing so the question of a smooth finish did not enter the equation.


Citadel Paints for the Steel/Iron Armour: 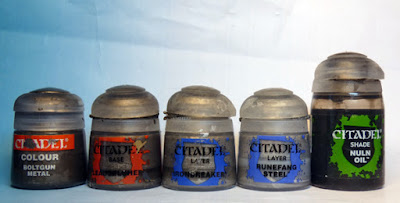 The scale and lamellar armour on these heavily armed Byzantine Infantry would be made of steel or iron plates but I wanted a bit of a contrast between the the mail and the scale/lamellar so I chose to paint this particular armour as if it had been gilded. Opting for a bronze look I picked out a selection of Vallajo Game Colour metals as they are packed with pigment and as I would be dry brushing again this was crucial.

The scale and lamellar was painted with VGC Hammered Copper and when completely dry given a  slightly watered down wash of Citadel Agrax Earthshade. It was then just a case of light and lighter dry brushes of VGC Brassy Brass, VGC Bright Bronze and finally a mix of 70% VMC Bright Bronze/30% Polished Gold on the absolute high points on detail. I might end up painting a final highlight of this armour at a later stage dependent on how the colours work together on the model later on. 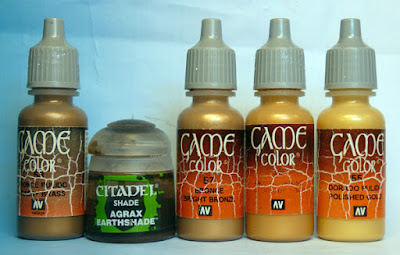 
Army Painter Paints for the Flesh: 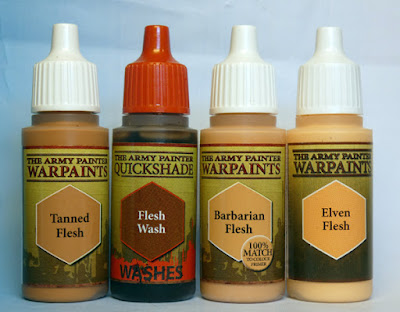 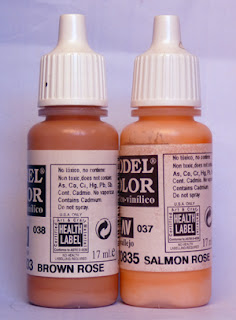 Front and Back Views of the Miniatures: 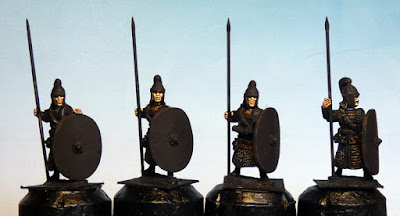 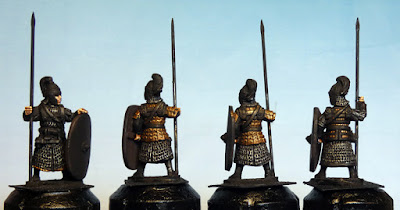 Close ups of two of the miniatures so you can see some of the detail at scale! 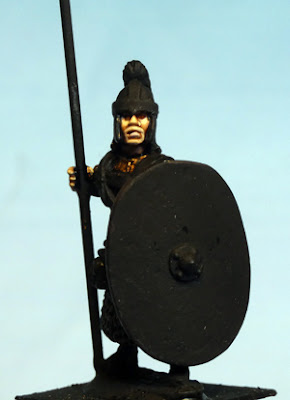 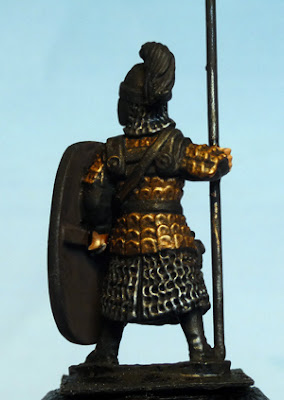 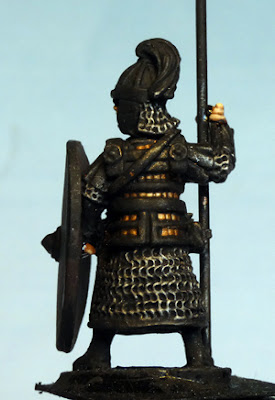 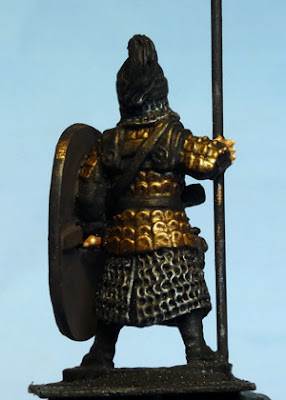 Afterthoughts? In retrospect I had not considered the size of the extra large shields when it would come to getting the brush into some of the lavish detail so I would have opted to drill and pin but leave the shields aside and glue them in place when the models were complete.

Next up will, surprisingly be Step Two!
Posted by Bedford at 16:48