Not being any sort of expert (not even a novice) on the AWI I decoded to send Steve an e-nail asking him to do a little write up of his beautifully crafted AWI game at Salute. He happly complied with my request and I'm pleased to show you his write up below:

Okey dokey, a quick run-down. Feel free to use, adapt or ignore the following:

I have been  wargaming the AWI for a very, very long time. I have also been staging demonstration games set in the period, since 2002.
Despite this I have never organised a demo game of one of the war's iconic battles; Guilford Courthouse.

Ignoring the obvious anniversaries of Waterloo and Agincourt, I elected to put on GCH at Salute 2015 (the 234th anniversary!)
GCH was a struggle for dominance in the Carolinas between the Crown army of Lord Cornwallis and the rebels of Nathaneal Greene.
Here is the intro to the battle from my black powder supplement "Rebellion!":

General Nathaneal Greene spent the first months of 1781 evading Cornwallis’s attempts to bring him to battle in a campaign now known as “The Race to the Dan”. The overwhelming British success at Camden in the preceding August was followed by defeats at King’s Mountain and Cowpens that seriously diminished loyalist activity in the south. With Cornwallis’s army gradually eroded by attrition and his own troops reinforced by militia from Virginia and the Carolinas, Greene decided to make a stand at Guilford Courthouse in mid-March.
Cornwallis was desperate to achieve a significant battlefield victory over Greene, knowing this was is only hope for a successful end to his southern campaign. His confidence in his troops was high and so, despite being outnumbered by two to one and with his opponent in favourable terrain he decided to attack Greene’s position at Guilford.
The resulting battle would be a microcosm of the revolution. Veteran redcoats would carry their bayonets into the heart of an American citizen army and emerge victorious on the field, but so weakened by casualties that they were forced to abandon their campaign.

Having decided on this about a year ago with the view that I had most of the figures all ready to go, I spent January, February and March painting a completely new force of militia and two regiments of Virginia continentals. And an artillery limber. And some civilians. And a few new generals...

To complete the battlefield I also painted up a model of the courthouse itself and four ploughed fields.

I also wrote a set of rules as I was feeling a bit stale with Black Powder.

So with more or less no effort I was ready to go :-)

A crack team of wargamers was assembled, but couldn't make it so I was helped by my mates instead. Chum Mog kindly produced a cartoon AWI soldier who became the artwork on our team T-shirts and some basic information was put together to help explain the battle to passers-by; whether they wanted to know or not.

The figures used were all from my collection and are mainly Perry miniatures with s few of the older Foundry range sculpted by Alan Perry. There are one or two figures from other manufacturers. Here are the notes from the day:

Figures:       These are mostly from the range manufactured by Perry

Miniatures (TE15), supplemented by some of the figures that Alan Perry sculpted for Wargames Foundry (TK29).

Terrain:       The boards are the polystyrene type produced by TSS and have been customised to make them more interesting and harder-wearing. The large hill was scratch-built from MDF, polystyrene and hobby materials.

Buildings:    Produced by Grand Manner, Hovels and Architects of War.

Fences:       Home made from wooden beading, aquarium gravel and matchsticks.

Rules:         Our own set, incorporating ideas from Fire & Fury, British Grenadier! and Black Powder (among others) and developed specifically for the AWI.

We arrived at ExCel at around 8am and were set up just before 10. The day was busy with lots of interest in the game, but we managed tp play through to a conclusion. The Crown army broke through the rebel front line, but became bogged down in the woods and despite routing a lot of militia they ran out of steam and some redcoat units were forced to retreat by spirited counter-attacks. In the end we declared a rebel victory and Cornwallis went away to lick his wounds...

And the moment you have been waiting for: 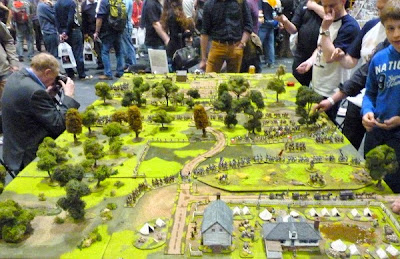 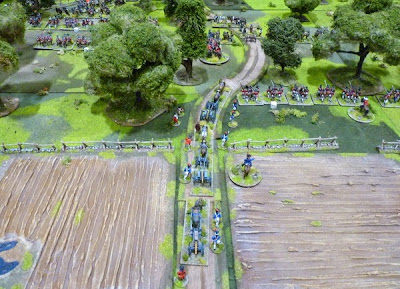 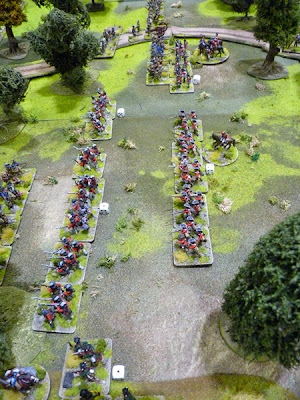 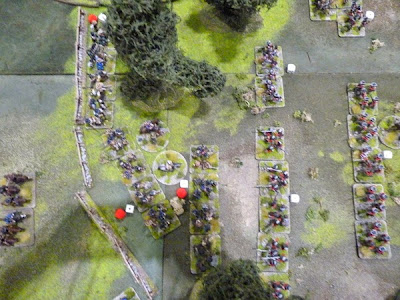 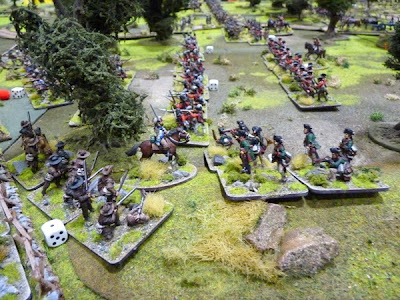 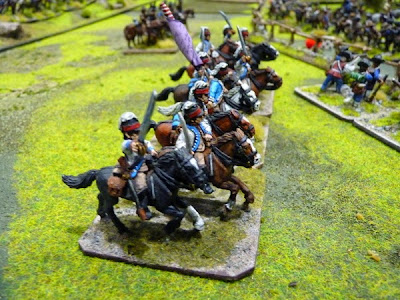