I've started speed painting up some Swiss Pike for my long overdue Battle of Fornovo 1495 project. Please excuse the gloss varnish in the picture; the miniatures are patiently waiting another six days before they see any matt varnish. I decided to go for a speed painting method as realistically this was the only way they are ever going to get onto the table top before I kick the bucket! It was a simple choice between speed painting leaving the miniatures to languish in the box or clean them up and start painting! The mini's have been painted in the Canton colours of Lucern and Zug. It seems clear that the Swiss did not fight in their traditional Canton liveries at Fornovo (see below) but a few here and there sprinkled in will not look too out of place.
I will be putting much more effort into painting the command stands and vignettes but the rank and file will have to make do with what they get for the reasons outlines above. It must be nearly a decade since conception of the project and the one vignette so far is really not doing the job of putting on a display game! LOL 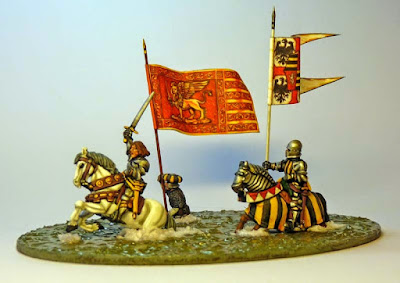 These will be representing the Swiss pike hired by Charles VIII during his Invasion of Italy culminating in the battle of Fornovo. The question I have is what sort of liveries would they be wearing? Given the vast wealth of the Kingdom of France it seems only logical that many of the mercenaries would have been given a livery coat or at the very least a least a sash. Or alternatively would at least some of them have fought in the colours of their Canton? They were certainly hired as Mercenary "bands" It is a question that I find some difficulty in answering to my satisfaction. I think I may have to compromise and go for both interpretations. Possibly have a few Canton liveries at the back of the pike square and something more akin to that of the image below taken from The Italian Wars Volume 1, The Expedition of Charles VIII into Italy and the Battle of Fornovo, Massimo Predonzani, Rahelel Tico, Vincenzo Alberici, Helion and Company

It does seem that the Swiss were given to more lavish, dare I say garish, clothing during the campaign.
At present I have eight painted up, completed in one sitting, in the colours of the Canton of Lucerne. I will be adding to these while I work out how to go about speedily representing the multi coloured hose and sleeves.
I am also in a bit of a quandary over whether to add in any Canton banners. There is extant evidence that the Swiss fought under banners supplied by Charles VIII as seen below: 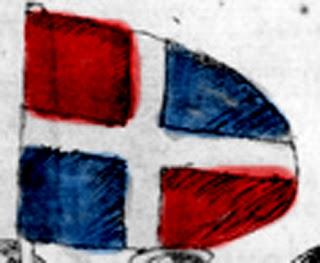 From The Italian Wars Volume 1, The Expedition of Charles VIII into Italy and the Battle of Fornovo, Massimo Predonzani, Rahelel Tico, Vincenzo Alberici, Helion and Company:
They bear them in front of the square shaped flag with a rounded fly end displaying a white cross in the middle on a field of azure and gules (blue and red). These colours do not belong to any of the cantons of Switzerland of the time; therefore, the group of soldiers must be part of a free company. One hypothesis could be that the depicted infantry kept the same banner they bore under the French; in fact the Aragonese and Italians sported the red cross to set themselves apart from their enemies beyond the Alps.
"The Battle of Fornovo", preserved in the National Gallery of Art in Washington (see below), is another iconography depicting Swiss flags of the time. This print is interesting because it accurately portrays the battle; the weapons used and the garments.
The infantry square of the Swiss troops in the pay of France is in the meddle of the scene, and exhibits among the pikemen's ranks five flags with a slightly pointed fly end displaying the cross. However, since the etching is on black and white, the field colours of the flags are not visible. 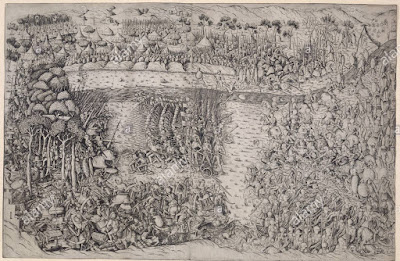 If anyone reading this has any info regarding the clothing, liveries and banners carried by the Swiss at Fornovo I would love to hear from you. There is a contact form on the right panel of my blog if you wish to get in touch.
Posted by Bedford at 06:05