Basing- How I do Mine- Step by Step 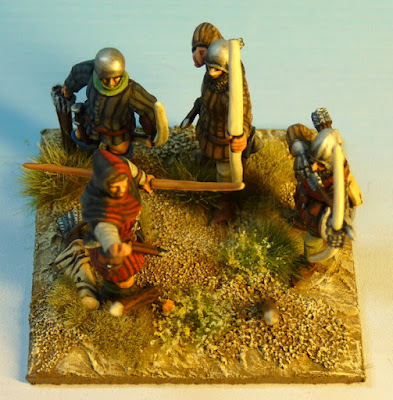 The subject of basing mini's is of course a very subjective thing. everyone has their own preferences and style.

As I was working on re-basing my HYW Verneuil English whilst painting up more of the lovely Perry Miniatures HYW English Plastics, I decided to put together a small series of articles that will hopefully prove to be helpful to someone out there. I've juxtaposed some of the Perry Miniatures conversions with some of the beautifully crafted Claymore Castings as 'period' wise they are not that far apart and armour as very valuable commodity was often passed down from generation to generation apparently even as late as the latter stages of the HYW.

The first stage is to glue the miniatures to the bases. This sounds pretty straight forward but over the years I've found myself changing the glue that I use several times. I started with two part epoxy, moved onto superglue (of varying thickness) and have finally settled upon good old PVA! Why? Well, it seems almost inevitable that one is going to re-base and the miniatures is much easier to pry off the base if one uses PVA than any of the other options! If they are stubborn you can soak the metal bases on the figures in water being very careful not to get any water on your paint jobs.

The second part is to add spackling/Pollyfiller etc. This should be applied very carefully as it can stick to the miniatures and if left to dry it can ruin a pain tjob trying to remove it.  If this does happen it's easily remedied by getting and old wet brush and simply wiping away the filler before it is completely dry I've given my filler a fairly thick wash of Vallejo Matt Black to aid the illustration but also to act as a sealant.

So, I've got some very fine Tallus, easily bought from a model shop, and this is applied by adding neat PVA to the desired areas and then sprinkling on the Tallus. Easy. 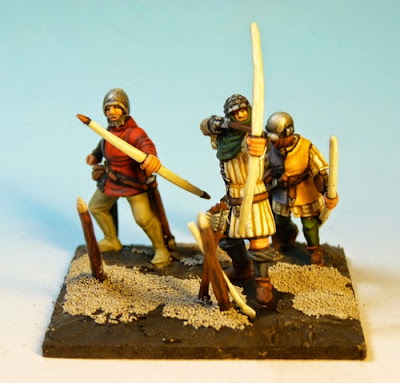 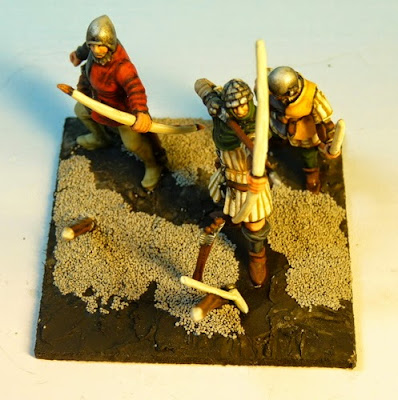 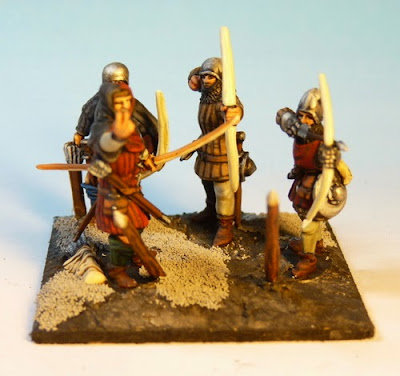 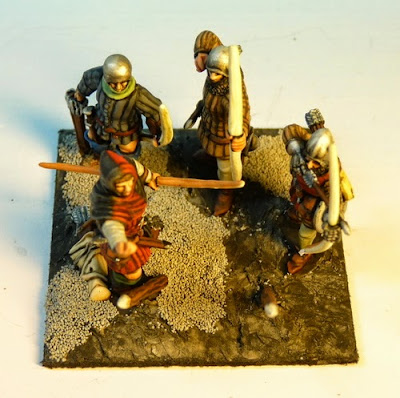 The next stage is to add some larger grains of sand. I tend to leave areas of the spackling/filler completely bare as this dry brushes up very realistically and adds more variation to the base. so, it's on with the neat PVA and on with the sand. 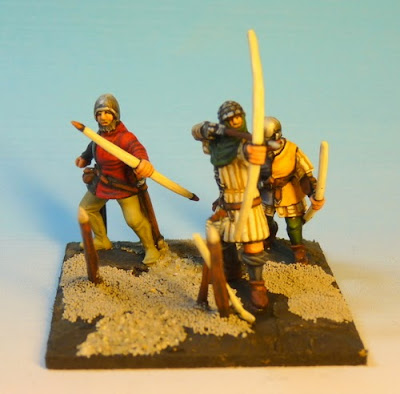 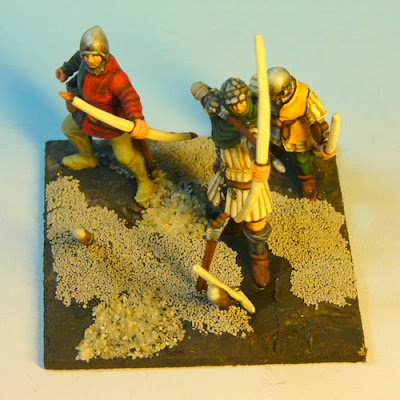 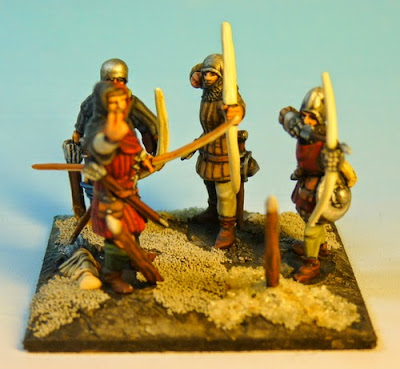 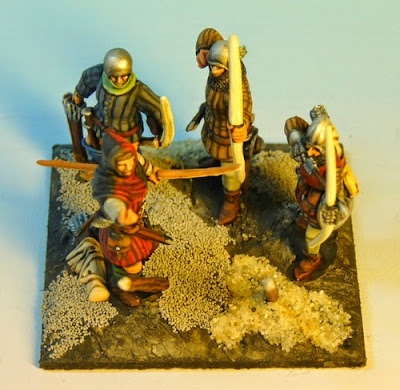 Painting the Base. Depending on the kind of environment you want to recreate in miniature then the colours chosen for the paints can vary wildly. I usually go for quite light bases unless the miniature/s definitely require a darker base. In the main this is because a lighter base allows the colours of the models to sing out a little more then a darker colour.

The paints involved for the HYW English Longbowmen: 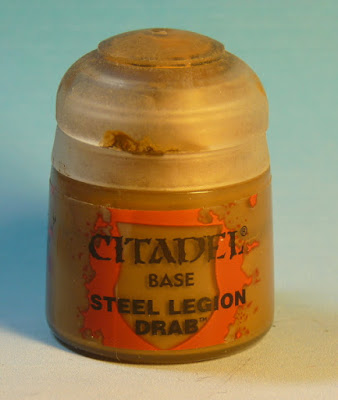 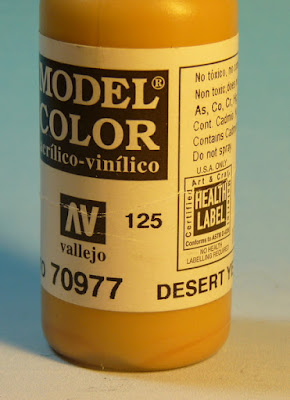 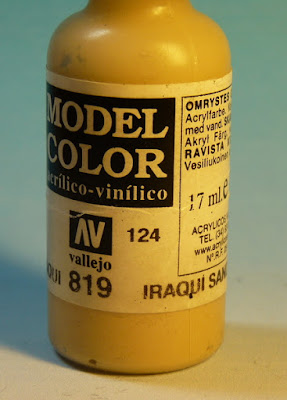 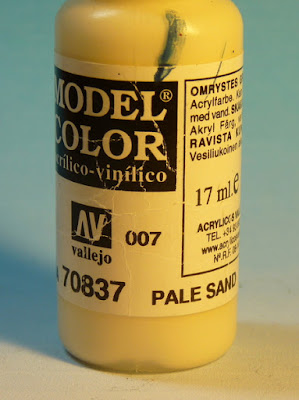 One question that I have been asked again and again is are these colours suitable for the HYW? Well, not all of the battles were fought in harsh encumbering muddy conditions (indeed the only famous battle fought in these conditions was Agincourt). My army is based on the Battle of Verneuil (a battle of equal importance to Agincourt for many reasons) and it was fought in august under a baking sun. Much of the earth in Northern France has a high clay content giving the soil an almost orange look and that is why I have chosen this palette for the basing. So, perhaps not as unlikely a colour as you might first have imagined(?).

The whole base is given a wash of GW Graveyard Earth and left to dry. I undercoated the bases black so I can see exactly where I put any PVA in the latter stages. I allow for another such wash and then paint around the edges with the same paint but slightly thicker in consistency.

This is all then given a heavy dry brush of Vallejo Desert Yellow like so: 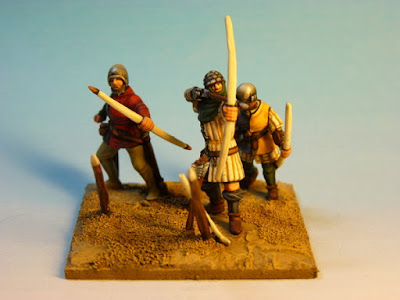 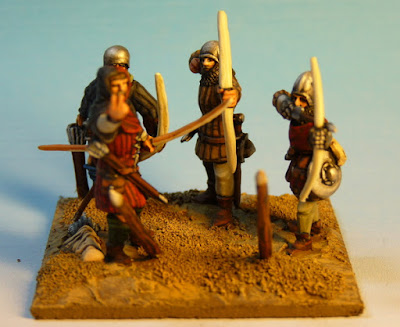 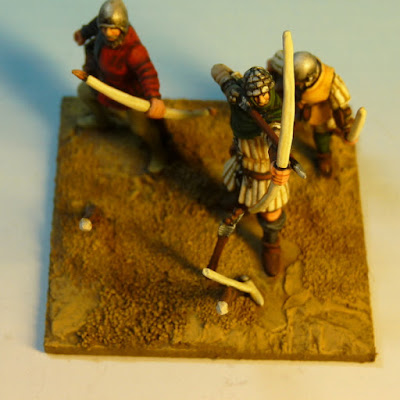 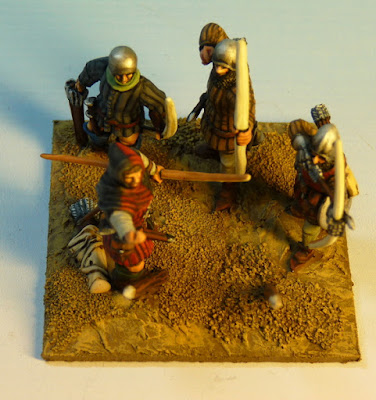 Next another dry brush of Vallejo Iraqi Sand: 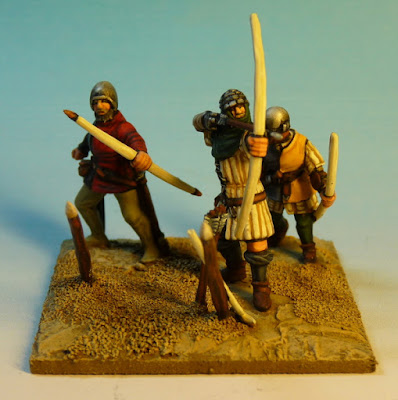 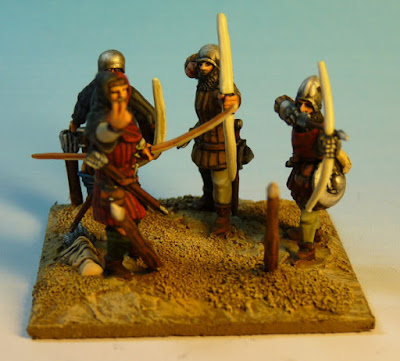 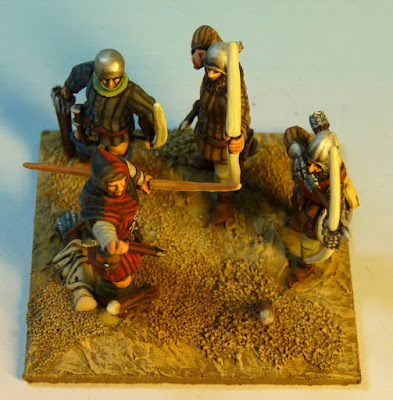 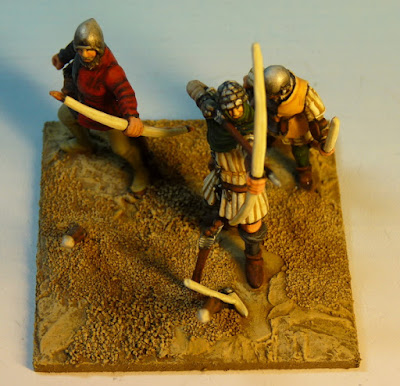 This is then followed by a much lighter highlight of Vallejo Light Sand: 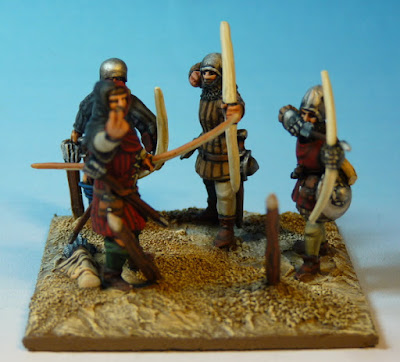 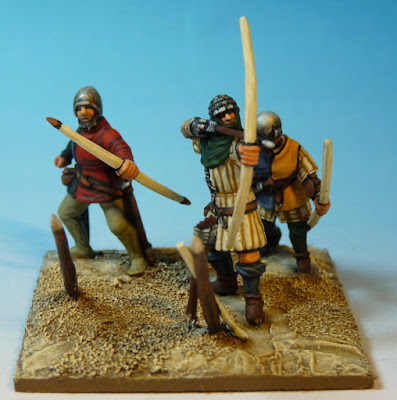 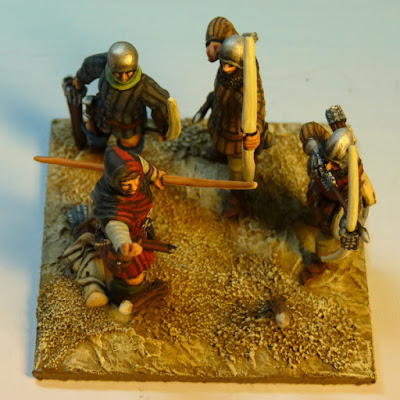 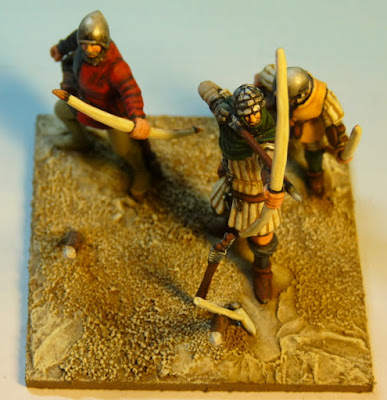 If you happen to accidentally dry brush any of the shoes on the mini's don't worry, a bit of mud on ones shoes would not have been as stressful as going into combat Medieval style! If you're not happy witrh the accidental drybrushing then simply wet the end of an old brush with saliva and gently brush away the offending paint. Likewise, some areas may be hard to reach on the base. This is not a problem as the this can be dealt with in the next section- Making the bases Pretty! That will be taken care of today and the pics posted up later.

The last part of this small article deals with adding static grass and/or grass tufts or putting any very thin washes down on the dry brushed earth. Washes are sometimes a good idea to vary the tonality of the soil slightly as occurs in nature where certain sections of soil might have a higher clay content etc.

In my case I chose not to add any washes, in all truthfulness because I haven't put a brush to a mini all day and I'm getting rather impatient to get to it! :>)

In general I'd mix up a light yellowy green colour (make sure that it is lighter!) I would then mix a further light by adding Vallejo Ivory. Then it's really just a case of lightly dry brushing the tops of the tufts but with a slightly less dry mix of paint. why? Well, the static grass is obviously not as hard a surface as a miniature and will take less pressure to add the paint.

And that's really about it. 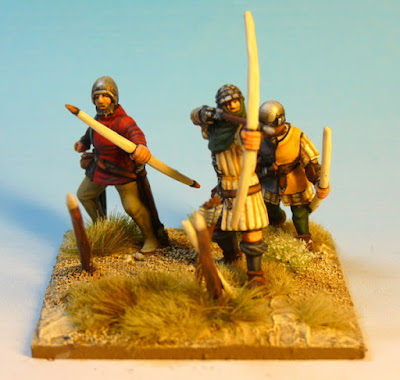 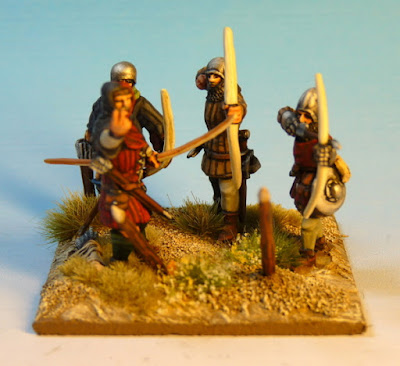 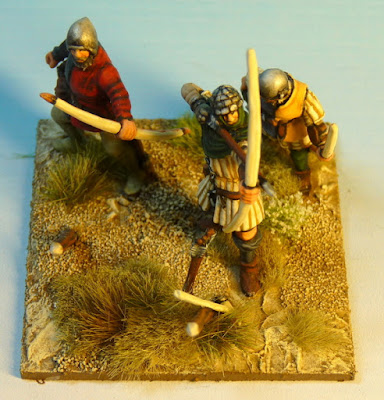 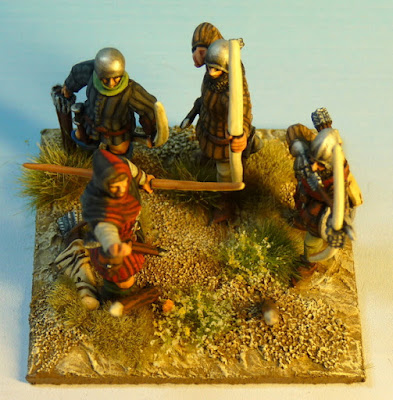 I hope that you found something useful in these basing articles(?). If you do things differently I'd love to hear from you so please leave a message below.